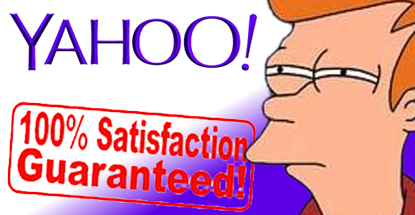 Yahoo’s daily fantasy sports (DFS) product is coming under fire after the definition of a ‘guaranteed’ prize pool turned out to be open to interpretation.

Yahoo’s DFS product, which launched with great fanfare earlier this month, offered a Major League Baseball contest on Friday that was “guaranteed to run” even if it failed to match the expected 10k entries. Yahoo published a payout schedule specifying the exact payouts each of those 10k entrants would receive based on an expected prize pool of $22k.

But the contest attracted only 2,944 entrants, to whom Yahoo paid out a total of $7,868. Though the payouts matched the published schedule for the top 2,944 entrants, some players took to forums like RotoCurve to express their outrage at Yahoo’s alleged failure to live up to its ‘guarantee,’ which these players interpreted as meaning Yahoo would pay out the full $22k.

While the controversy is debatable and the aggrieved number of players is relatively small, the public perception of misleading promotions won’t help Yahoo’s efforts to poach DFS players from the industry’s two main operators, DraftKings and FanDuel. But Yahoo’s tactics could also leave the company and the whole DFS industry open to further examination by US law enforcement.

Fantasy sports received an exemption under the Unlawful Internet Gambling Enforcement Act (UIGEA), the 2006 federal legislation that banned US financial institutions from processing payments on behalf of most online gambling operators. DFS operators have argued that they are entitled to this exemption, even though DFS didn’t exist when the UIGEA language was crafted.

Attorney Daniel Wallach (@WALLACHLEGAL) told Legal Sports Report that the UIGEA requires fantasy prizes to be established in advance and not tied to either the number of entrants or the total fees paid by these entrants. Wallach warned that if other DFS operators were to follow Yahoo’s lead of “announcing” a prize pool in advance while paying out a smaller amount, “a court would likely conclude that the conditions of the UIGEA exemption are not satisfied in a real-money fantasy contest.”

Yahoo may have a legal out in this particular case, as it had previously gifted players with a $1 credit, essentially making the $1 contest a no-risk venture for its participants, who each received a minimum of $2 from the prize pool. But Wallach noted that individual states like Florida, which ban betting even when it’s tied to an alleged ‘skill’ game, could still take exception. Given the ever rising profile of the DFS industry, there’s likely at least one ambitious state attorney general out there who’d relish the publicity that would come from a DFS test case.