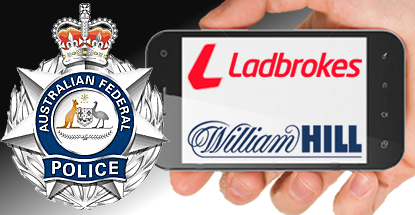 Australian federal police are looking into whether the local operations of UK-listed bookies Ladbrokes and William Hill are violating the country’s prohibition of online in-play betting.

Last month, the Australian Communications and Media Authority (ACMA) revealed that it was examining the legality of Lads and Hills’ new betting apps, which allowed punters to place online in-play wagers using the voice activation features on their smartphones. The companies claimed this was a legal workaround of the country’s gaming regulations, which restrict in-play betting to n-person wagers at a betting shop or by telephone.

On Wednesday, Aussie media site Mumbrella reported that the ACMA had handed its investigation files to the Federal Police. The ACMA declined to confirm the report, hut under Australia’s Interactive Gambling Act (IGA) 2001, the ACMA is limited to investigating online gambling content that is hosted from outside the country’s borders.

Australia ranks at or near the top of world rankings in terms of global gambling spending and its locally licensed online sports betting firms have pleaded with the country’s politicians to drop the in-play betting ban. Last October, Paddy Power’s new CEO Andy McCue called the in-play ban “something of an oddity” that was hindering growth of Paddy’s Australian online-only Sportsbet operation.

Australia has flirted with the idea of tinkering with the IGA but political skittishness has always scuttled such efforts. In 2013, the then-ruling Labor party backed away from plans to allow online in-play bets along with online poker. That September, Labor went down to defeat at the polls and the even more anti-online gambling Tony Abbott assumed the reins of power, seemingly putting a capper on future gambling expansion talks.