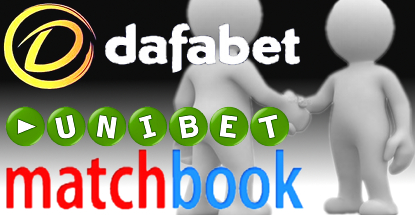 The deal will see Dafabet’s logo adorning Sunderland’s home and away jerseys starting with the 2015-16 EPL season. Dafabet recently inked a similar shirt deal with Football League Championship side Blackburn Rovers and has an international betting partnership with the EPL’s Everton.

Dafabet’s head of sports marketing and sponsorship John Cruces acknowledged that the company had been “very proactive in the last few months increasing our presence in football.” While Dafabet holds a license issued by the UK Gambling Commission, its chief audience is football-mad punters in Asian markets, and Cruces said “being on the front of a Premier League club shirt was vital for our global presence.”

MATCHBOOK SUPPORTS RIGHT TO PLAY
It’s not on par with an EPL shirt deal, but UK-licensed online betting exchange Matchbook has inked a deal to sponsor this week’s 2015 Right To Play World Cup corporate charity football tournament in London.

This Wednesday (3), some lucky team of sweaty out-of-shape corporate execs (and their ringers) will get to hoist the Matchbook Trophy at Stamford Bridge stadium. Proceeds from the event will help fund sports and play activities for kids in Africa, the Middle East and Asia through the Right To Play initiative, which was founded in 2000 by Olympic gold-medalist Johann Olav Koss.