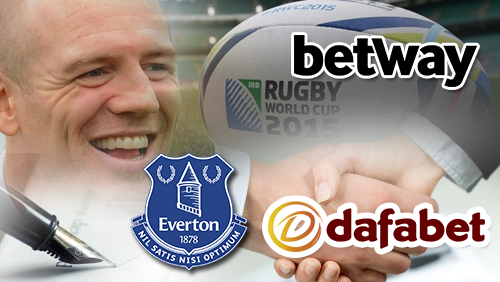 Under the terms of the agreement, Dafabet will be able to continue offering fans an array of promotional events and offerings to help boost the team’s interaction with its supporters. The Asian betting operator will also provide Thai and Chinese versions of Everton’s official website.

The Dafabet – Everton alliance began in 2012. Everton’s marketing and communications director, Richard Kenyon, said the two sides have enjoyed a “positive couple of seasons” together and Everton is “pleased to continue working alongside Asia’s leading online gaming site to offer our international supporters a premium gaming service.”

His counterpart, Dafabet Head of Sports Marketing and Sponsorship John Cruces expressed similar sentiments, saying that the online gambling site is looking forward to “continuing the relationship and further achieve our mutual goals.”

In other news, online betting company Betway is ramping up its promotion of this year’s Rugby World Cup after signing England rugby union national team captain Mike Tindall as a brand ambassador for the company.

Tindall is widely regarded as one of the best English rugby players in modern history and was a big part of the 2003 England team that won the World Cup. Tindall’s also a member of the Most Excellent Order of the British Empire (MBE) and is married to Zara Philips, the eldest granddaughter of Queen Elizabeth II and Prince Philip, Duke of Edinburgh.

As Betway ambassador, Tindall will become the face of Betway in upcoming media appearances. He’ll also create content for the Betway blog in the run-up to the World Cup, in addition to the autumn internationals and next year’s Six Nations tournament.

Betway CEO Richard Akitt called the signing of Tindall as a brand ambassador a “significant coup.”