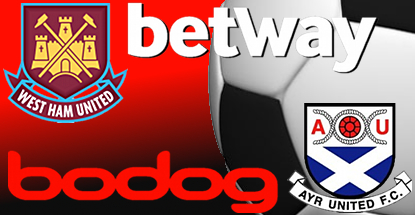 Online gambling operator Betway has given its profile a serious boost after inking a record-setting sponsorship deal with West Ham United. The Malta-based, UK-licensed Betway will pay the English Premier League side £20m over the next three and a half years, a considerable improvement over the £3m annual fee paid by West Ham’s former sponsor Alpari, the foreign exchange broker whose UK office abruptly closed last month.

The deal represents the biggest commercial tie-up in West Ham’s history. In exchange for all that cash, Betway gets its logo on the team’s jerseys and naming rights to the Boleyn Ground’s West Stand. West Ham is set to move to its new home at Queen Elizabeth Oympic Park in 2016.

West Ham vice-chairman Karren Brady welcomed Betway as the club prepared for its final season at its historic home, saying the team would we “working closely” with the gambling firm as it prepared for the transition. Betway exec director Bob Dutnall said the firm was chuffed to have inked the deal “at a time when the team are performing so well.”

BODOG AND AYR UNITED TO KICK ASS FOR FIFTH CONSECUTIVE YEAR
A little further north, online gambling operator Bodog has re-upped its sponsorship of Scottish League One side Ayr United FC. This marks the fifth consecutive year the parties have been joined at the hip, making it one of the longest partnerships in Scottish football.

Ayr United are currently battling to avoid relegation after a disappointing season that saw former manager Mark Roberts given the boot in favor of Ian McCall. Bodog brand founder Calvin Ayre said McCall has “brought about a tangible change of mood” at the club, priming it for success in the 2015-16 season. Ayre added, “as we say over here, ‘”let’s kick some ass.’”

Ayr United commercial manager Grame Miller said Bodog’s “passion for the club make them a pleasure to deal with.” Miller added that Bodog, who also serve as official Asian betting partner of EPL side Arsenal, “were delighted to enter into talks earlier than ever before this year as we can now get our new strips ready for the fans to buy at our final home game against Stirling on the 25th April.”