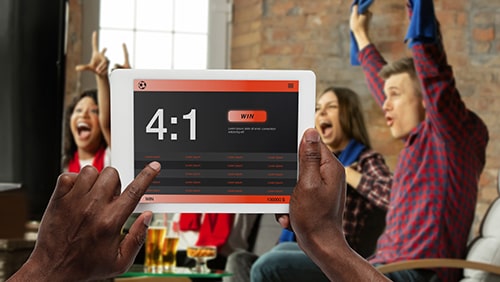 The NFL regular season is now officially in the books and, with it, the last push for sports gamblers before taking a look at who is in the playoffs and who has a shot at winning the Super Bowl. The Bodog sportsbook continued to see a lot of wagers on both NFL and college football games this past weekend as the final games were played but, with its season just getting started, the NBA is slowly gaining more ground. By this time next month, with only the Super Bowl remaining, NBA wagers will rule the charts.

The NFL gave Bodog 33.67% of its action this past weekend, followed by college football and its 25.8%. The college football championship game is going to be played next Monday, pitting the Ohio State Buckeyes against the Alabama Crimson Tide in what is going to be a rematch from several years ago. This game is certain to find a lot of wagers, with both teams enjoying nationwide support.

The NBA accounted for 15.74% of the wagers on Bodog this past weekend, slightly lower than what was seen a week ago. This was undoubtedly due to the final push in the NFL regular season. Men’s college basketball wasn’t too far behind, at 15.48%, a hint of what’s to come once the NFL and college football seasons wrap up. Following on the heels of football and basketball, soccer continues to grab some of the action, but not a whole lot. Spain’s La Liga picked up 1.97% of the Bodog wagers, Germany’s Bundesliga followed with 1.87%, England’s Premier League was next with 1.55% and eSoccer and the GT G-26 League rounded out the soccer segment with 1.39% and 1.31%, respectively. Table tennis continues to hang in there, capturing 1.21% of the wagers.

When the Buckeyes met the Clemson Tigers to find out if they were good enough to make it to the championship game, they found bettors giving them a lot of attention. That game was the top-ranked game on Bodog this past weekend, getting 19.13% of the action. The NFL managed to claim the second spot, with the game between the Washington Football Team (WFT) and the Philadelphia Eagles grabbing 16.82% of the wagers. Washington won that game and are headed to the playoffs after demonstrating what determination and stubbornness in the face of adversity can deliver. From an owner being called out for sexual harassment to a head coach battling cancer, the WFT has had a difficult season.

The list jumped back to college football for third place, with the game between Alabama and the Notre Dame Fighting Irish picking up 13.11% of the action. In fact, on the top-ten games list on Bodog, five were college football and five were NFL. While some states have decided that wagers on college sports shouldn’t be allowed, these games are still commanding a lot of attention from sports gamblers and this is only going to increase over the next couple of years.