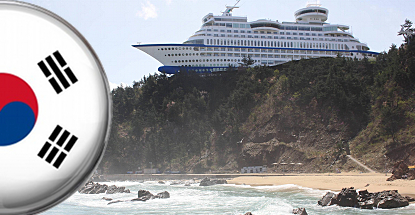 Kangwon Land is unique among South Korea’s 17 casinos in that it’s the only one that accepts South Korean gamblers. Despite its remote mountainous location roughly 200km from Seoul, the property generated revenue of KRW 1.4t in 2014, more than the other 16 foreigners-only casinos combined.

LOCALS IN CRUISE CASINOS? NOT SO FAST…
South Korea’s Oceans and Fisheries Minister Yoo Ki-june visits Shanghai on Wednesday in a bid to drum up business for the nation’s cruise industry. In January, the government passed legislation allowing domestic cruise ships to add casinos to their entertainment palette. Earlier this month, Yoo’s ministry announced that these shipboard casinos would be ‘open’, i.e. open to local residents.

Not long after that statement, an official from the Culture Ministry – the folks in charge of issuing gaming licenses – said no one had discussed this plan with them. The official claimed it would take “considerable time to draw a public consensus” on the idea of letting locals gamble on the high seas.

The Culture Ministry reportedly fears the ripple effect of such a decision. The Korea Herald quoted an unidentified ‘industry insider’ saying that if locals were allowed to gamble onboard, the large integrated resorts being built near Incheon and on Jeju would “call for the equal treatment.”