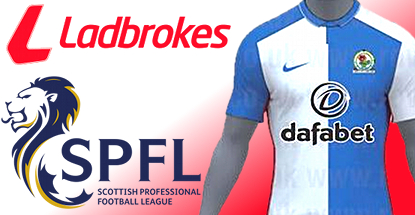 UK bookies Ladbrokes have signed on as the new league sponsor of the Scottish Professional Football League (SPFL).

SPFL CEO Neil Doncaster has been roundly criticized for failing to bring in enough sponsorship dosh. On Wednesday, Doncaster said the new partnership was the result of “significant investment of energy and effort” and represented the opportunity “to tell the story of a modern, engaging and exciting Scottish football environment.”

Ladbrokes CEO Jim Mullen called the deal “one of the best opportunities in British sport.” Mullen said Scottish football “deserves a committed supporter and our financial backing will help to ensure every level of the game benefits from Ladbrokes’ involvement.”

DAFABET INK ROVERS
Down in the Fooball League Championship, online gambling operator Dafabet has inked a multi-year sponsorship with Blackburn Rovers. The multi-million-pound deal, which is believed to be for a three-year term, will see Dafabet serve as the club’s official international betting and gaming partner. Dafabet’s logo will adorn the team’s blue-and-white home and away shirts and the deal contains an option for an annual overseas preseason match.

Dafabet head of sports marketing John Cruces said the online gambling operator was well aware that this year marked the 20th anniversary of Rovers winning the English Premier League championship. Cruces said Dafabet was “sold on the club’s ambition to get back into English football’s top flight.”

The deal bolsters Dafabet’s visibility in UK football, having seen their name adorn the shirts of FA Cup finalists Aston Villa for the past two seasons. Last month, Dafabet extended its international betting partnership with Premier Leaguers Everton through the 2017-18 season.