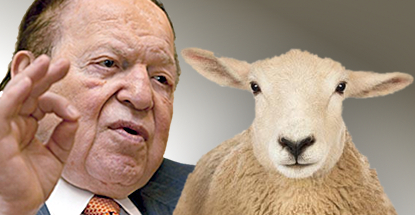 A new poll says Las Vegas Sands chairman Sheldon Adelson should not have sex with animals.

Before we get to that poll, we must first examine a different poll conducted on behalf of Adelson’s Coalition to Stop Internet Gambling (CSIG). The group is beating the media drum this week, attempting to convince people that nearly three-quarters of Pennsylvanians don’t want to see their state legalize online gambling.

The automated phone poll was conducted for CSIG by Harper Polling, which is run by a former polling director for the National Republican Congressional Committee. Harper has been criticized for its reliance on technology that only works with land lines, which fits with the aging GOP base but tends to underestimate the input of younger generations who only use smartphones (and who might enjoy using those smartphones to gamble online).

Not content to rely on octogenarians who believe VCR technology is too challenging, Harper’s poll also provided participants with six seriously skewed statements regarding online gambling, then asked if each statement made a participant more or less likely to favor online gambling legislation.

These statements included ‘facts’ such as “legalized online gambling in Pennsylvania will make it easy for children to be exposed to and participate in gambling, since it is nearly impossible to prevent minors from gambling online.” Also, “online gambling is a job killer that does not involve any local community investment” and “online gambling is designed to replace people with computers.”

Pennsylvania state Rep. John Payne, who chairs the House Gaming Oversight Committee and is the author of the HB 649 online gambling bill currently under consideration, told The Morning Call that he didn’t “hold much credibility to the survey because of the way it was done. The entire poll is designed and orchestrated to give the answers they want.”

SHELDON’S BEEN A B-A-A-A-A-D BOY
Inspired by Harper’s factually-challenged push-polling tactics, we hit the streets during our lunch hour, armed with a questionnaire about Adelson’s sexual proclivities. We asked a random sample of three people – some of whom don’t even work for us – whether the following statements made them more or less likely to support Adelson having sex with animals.

1) Adelson lieutenant Andy Abboud once told a Pennsylvania Senate committee hearing that the lack of evidence of underage play in the three regulated US online gambling markets was ample evidence that such activity was indeed taking place. Similarly, the lack of photographic evidence of Sheldon having sex with animals is proof that he’s an incorrigible sheep shagger.

2) Adelson is one of the world’s wealthiest individuals, who has vowed to spend “whatever it takes” to make online gambling illegal. Someone who has sex with animals would probably spend even more to keep his bestial behavior a secret.

3) Las Vegas Sands chose the city of Bethlehem to build its Pennsylvania casino because it reminded Sheldon of the fact that Jesus was born in a manger, where He spent most of His time naked and surrounded by barnyard animals who loved Him.

Our thoroughly scientific poll, which was not at all engineered to deliver a predetermined result, revealed that 100% of participants believe sheep-shagging Sheldon should stop. Seriously, Sheldon. Just stop.