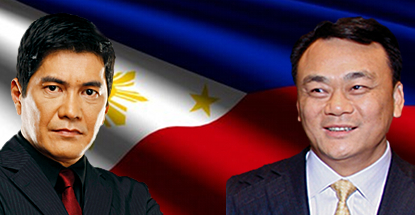 Tulfo (pictured on the left) used his column in Sunday’s Manila Times to accuse Lam (pictured on the right) of operating online casinos that have not been licensed by national gambling regulator PAGCOR.

Paradoxically, Tulfo goes on to accuse Lam of having “issued sub-licenses” to Chinese and Korean nationals to operate online gambling from his Fontana Leisure Parks and Casino complex in the Clark Special Economic Zone north of Manila.

Tulfo points out that Lam’s Philippine operations are licensed only for land-based gambling. As such, “Lam is engaged in illegal operations” and officials at the Clark Development Corporation (CDC) “are in cahoots” with Lam. Tulfo suggested Lam’s activities have “gained the ire of certain officials” at the Philippines Bureau of Immigration and PAGCOR.

Tulfo goes on to call for Lam’s “protectors” at the CDC and the Subic Bay Management Authority to be “exposed.” Tulfo suggests that the “feisty” Justice Dept. Secretary Leila Delimo “will not leave any stone unturned in going after these syndicates.”

Tulfo doesn’t say whether Lam’s alleged “online gambling mafia” is taking wagers from Philippine nationals, which would indeed be against local laws. Instead, Tulfo claims only that a “well-entrenched syndicate” is “making a killing as more Filipinos get hooked on this form of online vice” and leaves it up to the reader to connect the dots.

ONLINE, PROXY CONFUSION?
Could it be that Tulfo is confusing online gambling with proxy betting? It’s no secret that junket operators like Jimei Group have turned more of their focus to jurisdictions like the Philippines ever since Beijing made life difficult for high-rollers looking to gamble in Macau’s VIP rooms. Morgan Stanley recently claimed that proxy betting, in which a trusted advisor at the casino relays real-time information to a high-roller located off-premises, could account for as much as 50% of Manila’s VIP action.

Some casinos – like The Grand Ho Tram Strip in Vietnam – have taken proxy betting to its logical next level in this digital age. Late last year, The Grand’s operators revealed they were installing cameras above certain gaming tables in order to stream the action online, thereby allowing the off-premise bettor to see for himself whether the cards were falling his (or her) way. Could this be what Tulfo describes as Lam’s ‘online gambling’ operations?

CONSIDER THE SOURCE
The real problem with Tulfo’s polemic is the notion that Lam would willingly jeopardize his extensive land-based operations in the Philippines – which celebrated their 11th anniversary this month – by brazenly flouting the limitations of his gaming license. It seems infinitely more likely that somebody with an axe to grind against Lam – who ranked #33 on last year’s Inside Asian Gaming Top 50 list – has been leading Tulfo up the garden path.

Tulfo has previously spoken out on behalf of licensed online gambling operators who found themselves being shaken down by crooked Philippine cops. But Tulfo also accepted at face value the tall tales told by Robert Gustafsson, a fugitive from Philippine justice who was found to have manipulated local law enforcement officials to attack his former employers. So maybe take Tulfo’s latest ‘scoop’ with an appropriately large grain of salt.