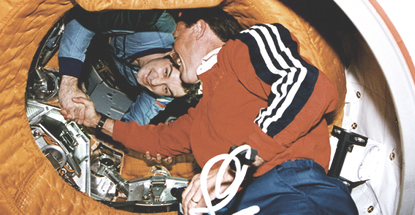 American history was made on Tuesday when the states of Delaware and Nevada officially began sharing online poker liquidity.

The interstate online poker – and only online poker – deal between the two states has been a long time coming but WSOP.com head of online poker Bill Rini confirmed the soft launch of the network on Tuesday night. Reports are emerging of players from the two states exchanging greetings like astronauts meeting cosmonauts through the hatch of the Mir space station.

Sadly, while the date itself is historic, the immediate impact of this launch will be muted. Nevada’s intrastate online poker market was on a sustained negative trajectory until it stopped reporting revenue in December (after falling to just two operators the month before). Meanwhile, Delaware’s already wafer thin online poker revenue fell 70% in January.

So in the short term, at least, this is more about huddling together for warmth than setting anything on fire. A low profile might not be such a bad thing, as any potentially embarrassing technical kinks can be tweaked by network operator 888 Holdings before America’s anti-online zealots get wise.

One can’t help but think of Alexander Graham Bell after he finished the first call on his new telephone, suddenly realizing he had no one else to call except his assistant in the other room. Here you have this fascinating new technology at your disposal and there’s no one to booty call.

Obviously, Bell’s invention ultimately spawned a universe of connectivity and chances are we’ll always look back at this day with a tinge of nostalgia for having been there when America’s non-racing interstate online gambling cherry was popped. Especially if Sheldon Adelson’s rent-a-pols do his bidding and pass the anti-online Restoration of America’s Wire Act, which would consign all states’ online technological wonderments to the flames. Still, fun while it lasted, huh?