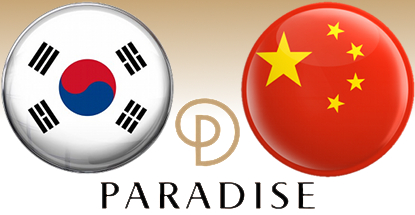 Paradise’s expansion will double the size of the gaming area at its Jeju Grand Hotel casino, while expanding the gaming floor space at two of its other four properties. Paradise is South Korea’s top foreigners-only casino operator, controlling nearly half the country’s international market. The country’s most successful casino remains Kangwon Land, the only one of South Korea’s 17 casinos that accepts locals.

Paradise vice-chairman Lee Hyuk-Byung told Bloomberg that the company’s casinos weren’t full on weekdays, but “from Friday afternoon to Sundays, it’s fully packed and very crowded.” Lee said Chinese gamblers accounted for 67% of Paradise’s high-rollers and 77% of its mass market customers last year, up from 46% and 50% respectively in 2010.

Paradise was among the South Korean casino operators whose share prices took a tumble in December after Chinese government officials criticized Jeju as a “new haven” for Chinese gamblers. More recently, China warned international casinos to stop luring their citizens to gaming emporiums.

Lee said Paradise didn’t directly market to Chinese gamblers, but relied instead on “word of mouth.” Regardless, Paradise investors relation official Hyejeong Shim said the company had yet to see any negative impact as a result of Beijing’s fearmongering.

Lim said the project would contain a casino and hoped to open its doors by 2019, two years after Paradise City opens to the public. Unlike Lee, Lim makes no bones about who the airport’s project hopes to lure. “We want to attract more visitors from China, taking advantage of the close distance.” But Lim insists that the project “can’t just be about casinos.” It also can’t simply be a means to attract high-rollers, as the overall goal is “to help create more traffic into the airport.”

Both domestic and international firms have reportedly expressed interest in investing in the project, which will be built on an 809-acre plot near the site of an in-development second passenger terminal. Lim noted that the recent shift in Macau’s previously unstoppable fortunes has sparked interest in the Incheon project due to Macau’s new “growth limitations.”

In addition to Paradise City, the Incheon area is the site of a joint venture by Caesars Entertainment and the Lippo Group. Hong Kong conglomerate Chow Tai Fook Enterprises has also inked a letter of intent to build a $1b resort casino on Yeongjongdo.