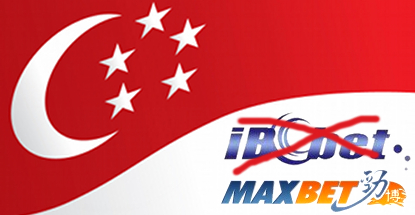 As promised, Singapore began blocking unauthorized online gambling sites on Monday (2) in keeping with the restrictions of its new Remote Gambling Act (RGA). On Tuesday, a spokesperson from Singapore’s Ministry of Home Affairs told Agence France Press that the city-state’s digital guardians had succeeded in blocking “several hundred” online gambling sites from accessing their Singapore customers.

In addition to blocked sites, Singapore’s financial institutions have begun blocking money transfers to and from unauthorized sites. The Monetary Association of Singapore has ordered the Association of Banks in Singapore to ensure compliance with the RGA, which was approved by legislators in October. The RGA mandates harsh penalties for anyone caught flouting its restrictions, be they operators, gamblers or middlemen.

The RGA allows exemptions for certain local online operators who make significant contributions to local charitable/social causes. Lottery/betting operator Singapore Pools and race betting operator Turf Club have each previously indicated that they will apply for exemptions within the designated six-month window.

The list of blocked websites will be continually updated but not made public. Among the sites currently being blocked is IBCBet, which had already begun purging its Singaporean customers just days after the RGA’s passage. Other Asian online betting giants like SBObet are also confirmed to be on the naughty list.

Meanwhile, IBCBet has informed all its customers that it will soon be operating under the new MAXBET brand. A notice posted to the IBCBet site this weekend announced the launch of Maxbet.com, which “will soon replace www.ibcbet.com.” The notice said IBCBet will remain functional “for now” and login details remain the same for the new MAXBET site. Customers were told to expect emails detailing the change.

The Philippines-licensed IBCBet is considered one of the biggest Asian-facing online betting sites with a high brand profile, so the desire to rebrand is puzzling. However, the company garnered a lot of unwanted publicity via the arrest of Paul Phua last July in Las Vegas on charges of illegal online sports betting. Prosecutors claimed that Phua’s son Darren told them his father was a majority owner of IBCBet, although other reports have indicated that Phua sold the majority of his stake in the company years ago.