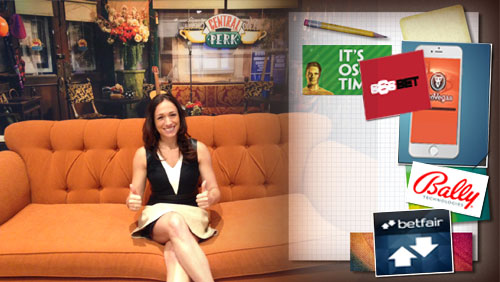 G2E 2014 is home to many a promo and PR stunt, really anything you can think of that grabs delegates’ attention and attracts camera crews.  This year Bally Technologies did an outstanding job with all of the above by bringing Lynda Carter, the original Wonder Woman, inviting Pitbull to their G2E party and my personal favorite, the “Friends” Central Perk couch and background for photo opps outside the G2E entrance.

What I enjoyed the most about the Bally Friends stunt was watching the delight on people’s faces when they took a picture of themselves on the couch (myself included).  Furthermore, anyone who posted one of these pictures to social media with the #BallyFriends tag became eligible to win a prize- I did just that and won Monica’s yellow peep hole frame, mailed straight to my office in London with a hand written card from Bally.

666Bet certainly wins the prize for most entertaining booth at the iGaming Super Show by hosting English football legend Harry Redknapp and actor Vas Blackwood (best known for his role in Lock, Stock as Rory Breaker) for delegates to mingle with.  The pair are featured in a 666Bet TV advertisement series and both serve as brand ambassadors for the operator.

What was so special about their appearance at the Super Show is they were friendly and accessible- available for autographs, pictures, interviews or even just a quick chat.  Their presence at a big iGaming event most certainly put a new company like 666Bet on the map.

While I’m sure some of you think this ad was done in poor taste, its hard to deny “Oscar Time” was a PR victory.  The ad featured Oscar Pistorius’s face on an Academy Awards trophy with the tag line “money back if he walks”, a one-off release that strategically coincided with the Academy Awards themselves and the commencement of the Pistorious trial.

The Advertising Standards Authority (ASA) was not happy with the ad and ordered its withdrawal in the UK after they received over 5200 complaints (an ASA record) from the public.  There was also a petition against the ad at Change.org with over 122,000 signatures.

Paddy Power CEO Patrick Kennedy defended his company’s campaign by pointing out it was about the trial and not the murder and mentioned it was the most talked about and reported on story of the year.

2-Betfair pays out early for “no” vote re: Scottish independence

Betfair snapped up all sorts of headlines throughout the UK when they announced their decision to pay out early on all fixed-odds punters who bet the Scots would vote “no” on Scotlands independence referendum.  Betfair concluded that “no” was the most likely outcome and therefore decided to “put their money where their mouth is”.

Payouts to UK punters totalled over £100,000, a relatively small price to pay for big time publicity.

The line outside the Regent Street Apple store in London prior to a major iPhone release is something you have to see to believe.  Eleven days prior to the sale of iPhone 6 in the UK, Leo Vegas, a mobile gambling brand, secured the first place in line by camping out until the iPhone 6 went on sale at 8am on September 19th.  After purchasing the first phone at 8:03am, the Leo Vegas representative handed off the gadget to a courier who delivered it at 8:21am to Alex Bowman, the lucky winner of the Leo Vegas iPhone 6 promotion.

Not only did this feel-good story make the headlines, the LeoVegas brand was also present on the ground with promotional staff mingling in the crowd and serving free LeoVegas coffee.