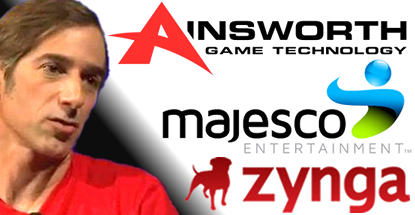 Australian gaming device maker Ainsworth Game Technology (AGT) wants to have its new social casino offering up and running by January. In August, AGT inked a joint venture with platform provider 616 Digital that called for AGT to provide 616 with 15 of its popular casino titles. The Players Paradise social casino was supposed to launch in December but AGT now says the product won’t debut until January.

AGT CEO Danny Gladstone admitted that AGT had lagged its major competitors (IGT, Bally) in joining the social casino party but suggested the delay had allowed AGT to develop “a quality mobile offering complete with improved mobile technologies.” Gladstone said AGT planned to offer a second social casino title later in the year that will provide “unique mobile and tablet game offerings.” AGT released a market update on Tuesday indicating it expected domestic revenue to fall 30% in the first half of its fiscal year and hopes are that social casinos will help put some spring back into AGT’s step.

MAJESCO DITCHES SOCIAL CASINO STAKE
Social casinos weren’t enough to rescue console video game publisher Majesco Entertainment, which revealed this week that it had “suffered losses that raise substantial doubt about our ability to continue as a going concern.” The company, which launched its new social gaming division GMS Entertainment a little over a year ago, engaged in some major layoffs at the end of October and says it is “currently not developing any significant new games for release in fiscal 2015.”

A filing with the Securities Exchange Commission reveals that Majesco sold off its entire stake in GMS to Pariplay CEO Gili Lisani for $250k cash plus an additional contingent payment of $270k if GMS or its Pariplay subsidiary earns $2m in net revenue over the next two years. If GMS or Pariplay is sold within three years and their value is placed at or over $20m, Majesco will receive a further $1m. Majesco said it expects to book a loss of between $1.3m and $1.7m on its social gaming experiment.

ZYNGA DIRECTORS’ SHARE SALE LAWSUIT TO PROCEED
A Delaware court says a civil lawsuit can proceed against Zynga founder/former CEO Mark Pincus (pictured) and four other company directors for selling stock while other early investors were still in lockup mode. In March 2012, Zynga waived the lockup for Pincus and his buddies, allowing them to sell hundreds of millions of dollars worth of Zynga stock two months before other early investors. The timing allowed Pincus to personally reap a $192m windfall before Zynga’s stock began the swan dive that shaved three-quarters off its IPO value.

Last week, the Delaware Court of Chancery rejected Pincus’ bid to dismiss the lawsuit. Judge Andre Bouchard said it was “reasonably conceivable that the benefit the director defendants received in the lockup restructuring was not entirely fair.” Plaintiff and Zynga shareholder Wendy Lee will now have leave to take depositions and procure documents relating to the waived lockup.

No bonuses for Ainsworth shareholders as dividends off the table
Erik Gibbs
28 October 2020
.