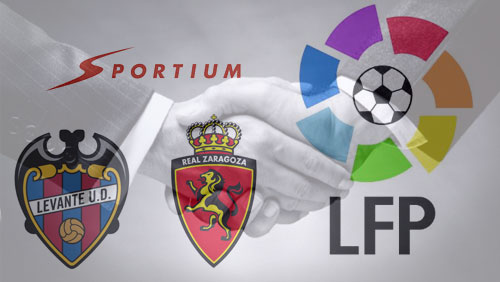 Spanish bookmaker Sportium has finalized a sponsorship with the Spanish Football League in their on-going attempts to promote and protect the interests of Spanish football.

The agreement was first announced in August and was confirmed late last week after Spanish football became engulfed in a high-profile match-fixing investigation involving a handful of teams in the top flight La Liga. Sportium and the Spanish Football League have agreed to promote each other while working closely to prevent new episodes of match fixing from happening in both Liga BBVA (La Liga) and Liga Adelante (Segunda Liga).

For the remainder of the current season, Sportium will be the “official betting house” of the Spanish Football League and will be promoted across all the games of the two leagues, both through stadium advertising and other media channels.

Atletico Madrid captain Gabriel Fernandez is arguably the most high-profile player embroiled in the match-fixing scandal involving his old Real Zaragoza team. Fernandez, more popularly known as “Gabi” faced a state prosecutor on Thursday and reportedly revealed the extent of his involvement, saying, “I did what the club told me to do.”

Gabi was the captain of Zaragoza back in the 2011 season when the suspicious Zaragoza-Levante match took place. Investigators have singled out that specific match as having potentially been fixed in order for Zaragoza to stay in La Liga. Previous reports have indicated that 12 Zaragoza players received a total of 120,000 euros in the days leading up to the match and used the money to pay off their rivals in Levante for agreeing to throw the match.

Gabi was responsible for the two Zaragoza goals in the 2-1 game that secured its safety from relegation that season.

If Zaragoza are found guilty of paying Levante to lose against them in the final match of the 2010-11 season, then it will be a test of the country’s football authorities as to what punishment they will impose.