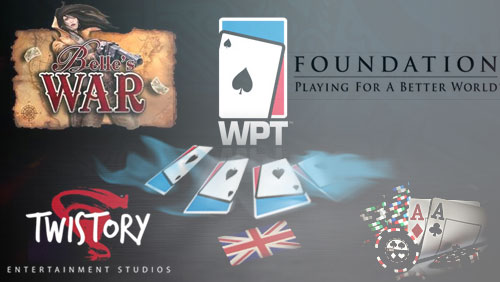 World Poker Tour (WPT), and Twistory Entertainment, release their first short clip of their Belle’s War TV segment; Paul Newey and Devilfish amongst the British stars confirmed to play in WPT UK; and the WPT Foundation head to New York City to host the ‘All-In’ for Kids Poker Tournament.

It was back in July that we first brought you the news of a partnership between Twistory Entertainment Studios and the World Poker Tour (WPT), and we can now share with you the first of a series of short videos featuring the actress Danielle Vasinova and stars of the poker world.

The deal sees televised segments of Twistory’s highly successful Belle’s War incorporated into upcoming episodes of the World Poker Tour’s televised coverage, and the first video stars Danielle Vasinova in the role of Belle, with Liz Lieu and Michael “The Grinder” Mizrachi taking on the role of cowgirl and cowboy.

Belle’s War players who finish amongst the top 13 of the mobile version of the leaderboard will also get an opportunity to appear as a contestant in a WPT segment. The shows are airing on Fox Sports Net (FSN), and a number of high profile pros will be joining Lieu and Mizrachi in the wild west.

November is going to be a very important month for Rob Yong, Simon Trumper, and the rest of the team at Dusk till Dawn (DTD).

As usual, Yong and Trumper are not sitting around hoping that players turn up, and they have already confirmed a decent array of British stars – both young and old – to appear in the weeklong festivities.

Barny Boatman (HR and ME), Chris Sly (ME), the Mad Turk (ME), Carlo Citrone (ME), Mitch Johnson (ME), Paul Newey (HR), and Devilish (HR and ME) are currently the names hogging rogues gallery on the DTD website.

There is a plethora of online, and live, satellites to choose from, so head to the DTD website for further details.

The WPT Foundation continues their ‘Playing for a Better World’ series of charity poker events by hosting the largest charity poker tournament to benefit a major US children’s hospital: ‘All-In’ For Kids Poker Tournament.

The event will be held at the Mandarin Oriental in New York City, Wed Oct 29, 2014, and the likes of former WPT Player of the Year, Andy Frankenberger, multiple WSOP bracelet winner Vanessa Selbst, and the event MC Phil Hellmuth Jr. will all be in attendance.

This particular tournament was co-founded in 2008 by the poker player and businessman Daniel Shak,

Speaking about the event, the WPT Prez, Adam Pliska, had this to say.

“In my recent visit with Lynn {Gilmartin} and Vince {Van Patten}, we witnessed firsthand the remarkable work being done by the caring and devoted staff of the Children’s Hospital of Philadelphia. CHOP’s dedication to the quality of life for children of all ages is admirable and profound, and WPT Foundation is honored to support a legacy at CHOP that consists of more than 150 years of providing ground-breaking and personal health care to young people.”

The event benefits the Children’s Hospital of Philadelphia (CHOP), and their CEO, Steven M. Altschuler, M.D., is delighted with the partnership.

“This is an exceptional event and we are delighted to once again partner with the WPT Foundation. While our young patients come to CHOP from all around the world, we treat thousands of children from right here in New York City, making this event even more special.”

So far, the highly successful tournament series has raised nearly $5 million for CHOP, once again proving poker’s passion for philanthropy.