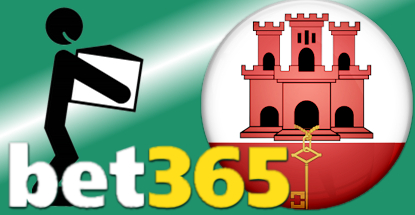 Stoke-based bookmakers Bet365 have relocated their online gambling operations to Gibraltar in a bid to streamline their corporate structure. The shift, announced Monday, will unite Bet365’s international online business under one roof and under one licensing regime.

The privately held, phenomenally successful Bet365 moved its online casino operations to Gibraltar in 2007 but had maintained its online sportsbook within the UK. That fact has left Bet365 better prepared than most of its competitors to absorb the impact of the UK’s new 15% point-of-consumption tax.

Bet365 insists that the Gibraltar shift will create no redundancies in Stoke, where the company is the top local employer. While some staffers in the company’s sports trading division will be relocating, others have been offered new positions at the company’s Stoke operations. Bet365 is pressing ahead with plans to expand its Stoke office complex, both in terms of square-footage and the number of employees contained therein.

Bet365 says the staff staying behind will “provide various contracted support to the Gibraltar operating hub, including software and technical support, outsourced customer services and contracted marketing services.” Bet365 called Gibraltar “a jurisdiction that offers a mature and stable environment for international remote gambling operators.” Bet365 will continue to pursue licenses in regulated markets to augment the licenses it already holds in the UK, Australia, Denmark, Italy and Spain.

The past month has witnessed a flurry of reorganizations as companies prepare for implementation of the UK’s new licensing regime. While many international operators have withdrawn or reduced their UK-facing operations, some UK operators have been similarly reorganizing their international operations to comply with UK Gambling Commission requirements that its licensees legally justify their presence in any grey or black market from which they derive 3% or more of their overall revenue.

Last week saw UK bookies Ladbrokes become the latest company to announce it was withdrawing from the Canadian market. Rumors flew that Bet365 would be next to announce a Canadian exit, although these rumors were subsequently downgraded to suggesting Bet365 would merely be reducing its marketing profile in the Great White North. Bet365 has for years served as a marketing partner of the Canadian Football League, a fact that has not gone down well with some provincial lottery corporation bosses. Bet365 has yet to publicly comment on the rumors.