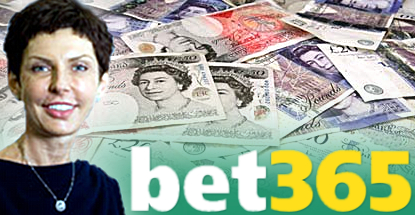 UK online bookmaker Bet365 has reported an 81% rise in its full-year profit, effectively making the privately-held Stoke-on-Trent-based firm the planet’s (known) largest online betting company. Operating profit in the 12 months ending March 31, 2014 came to £320.9m – handily drubbing the previous year’s £179m, which itself was up by a third – while revenue rose 38% to £1.28b. Bet365 co-CEO Denise Coates (pictured) issued a statement saying she was “pleased to report continued significant growth” and humble-bragged that the Bet365 brand “continues to be class-leading.”

Total betting handle rose 36% to £26.5b as the number of active sportsbook customers grew 39% to 2.9m, of which 1.7m were first-time depositors. Mobile wagering revenue was up 103% as mobile betting handle rose 107% and in-play wagers increased 37% year-on-year. Casino revenue rose 17% while bingo was up a more modest 8%.

Bet365’s revenue and profit figures compare favorably with numbers recently disclosed by PokerStars via the poker giant’s acquisition by Canada’s Amaya Gaming Group. In the 12 months ending Dec 31, 2013, PokerStars’ parent company reported revenue of £1.1b and pre-tax profit of £246m. Amaya’s acquisition valued Stars at $4.9b (£2.9b), placing a rough value of $6.2b on Bet365.

The number of employees on the Bet365 payroll grew 12% over the previous year to 2,686. The company is preparing to break ground later this month on a new 13k-square-foot office complex in Stoke, with a completion date of early 2016. The new office block will replace the five separate buildings Bet365’s staff currently occupy, which is indicative of the leaps and bounds by which the company has grown in recent years.

Bet365’s commitment to its Stoke roots was further demonstrated in its ongoing support of the Stoke City football club. Bet365’s previous fiscal year reported a £30.9m loss stemming from its controlling interest in the club, but that loss dropped to £4.9m this year despite football-related salaries nudging upward to £60.4m.

Bet365 also revealed that it was diverting £105m of its profits to the company’s charitable foundation. The Bet365 Foundation supports around 20 charity groups, including Oxfam, local cancer agencies and international relief efforts, including the post-Typhoon Haiyan cleanup in the Philippines. The Coates family can well afford their generosity, with Denise taking home £47.7m out of a total £85m in dividends paid to Bet365 directors last year.

Bet365 hangs up on its telephone bettors for the last time
Peter Amsel
5 June 2020
.