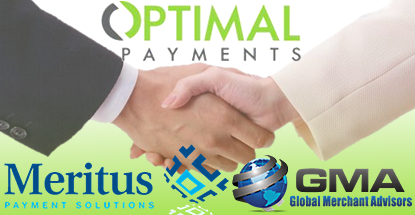 UK-listed online payment processor Optimal Payments has made a couple acquisitions intended to boost its US market presence and help position it for that magical day when California finally gets around to legalizing online poker. On Tuesday, Optimal announced it has agreed to pay $210m in cash and shares to acquire California-based TK Global Partners LP, which operates online payment processor Meritus.

Optimal laid out a further $15m to acquire Global Merchant Advisors, another California-based online payment processing outfit. Both acquisitions are expected to close in the third quarter of 2014. Optimal intends to maintain the Meritus brand due to its “strong presence and value” in the US market, which Optimal CEO Joel Leonoff described as his company’s “single greatest expansion opportunity.” Optimal shares rose 7.25% to £7.25 on Tuesday’s announcements.

Optimal’s choice of acquisitions was undoubtedly influenced by California’s continued threats to one day pass online poker legislation. While such passage looks increasingly unlikely in 2014 – and even a bill were to pass, it would likely get hung up by legal challenges – Optimal wants to ensure its ducks are in a row. Prior to the passage of the Unlawful Internet Gambling Enforcement Act (UIGEA) in 2006, Optimal’s Neteller division was the payment processor of choice for US online gamblers until it was hounded out of the US market in 2007 and its founders forced to pay a $136m penalty to the US Department of Justice.

Since rebranding from Neovia Financial in 2011, Optimal has been cleared to operate in all three US states currently offering a regulated online gambling market, striking deals with Caesars Interactive Entertainment, Bally Technologies, 888poker and the Borgata’s Bwin.party-powered sites. Optimal is also a VIP sponsor of the upcoming Global iGaming Summit & Expo (GIGse) in San Francisco.