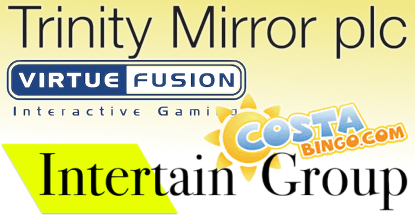 The online bingo business in the UK has been under-the-B-busy with dealmaking. In the first deal, Toronto-based Intertain Group has agreed to pay $45m to acquire the UK’s Mandalay Media, which counts Costa Bingo among its leading bingo brands and affiliate sites. Intertain will pay an additional sum of up to £15m depending on Mandalay’s future performance. Intertain says the deal is subject to it being able to arrange financing.

Mandalay’s bingo business generated revenue of around £16m and net income of £8m in the 12 months ending Aug. 31, 2013. Intertain began trading on the Toronto Stock Exchange in February and reported revenue of $2.9m in the three months ending March 31. Intertain acquired Cryptologic Operations and the InterCasino and InterPoker brands from Canada’s Amaya Gaming Group last year.

The deal will initially focus on Trinity Mirror’s Daily Mirror and Daily Record brands. Trinity Mirror has been aggressively diversifying its online gambling options this year. In April, it teamed with the Racing Post on a racing-focused affiliate site and with Paddy Power on a sports betting site. Tinrity Mirror’s head of group partnerships Mark O’Donnell claimed to be right chuffed to have gained access to Virtue Fusion’s “best-in-market products” while Virtue Fusion COO Daniel Philips claimed to be “proud to be associated with a market-leading media brand.”