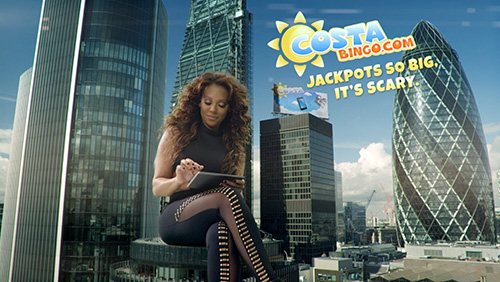 London, 2nd January 2014 – Towering over the capital’s landmarks, a giant Mel B sends terrified Londoners running for cover in CostaBingo.com’s new TV ad, which debuts this week on primetime.

The Former Spice Girl – whose outspoken personality famously earned her the nickname Scary Spice – is the star of a major advertising campaign by Costa, which in 2014 is aiming to become one of the UK’s biggest online bingo brands.

The £12 million,multimedia marketing strategyhas been commissioned by Costa’s owners BGO Entertainment. Co-founder Richard Skelhorn, is determined to make 2014 a breakthrough year for the Costa brand.

He comments: “Significantly scaling our business is our top priority this year and I would like us to challenge for the top position amongst UK online bingo operators.  We have a world-class operations team, which will help us reap maximum benefit from the additional interest generated by the campaign. We are already delivering substantially higher KPIs than many of our competitors.

“Afteroperating Costa for three and a half years, we feel that now is the right time to take it to the next level. The Mel B campaign is a clear statement of intent – and of our desire to reach new customers and raise our game even further.”

Mel B, who is currently a judge on the hit TV show “America’s Got Talent”, has never been the shy and retiring type.

She comments: “Would I like to stand 200ft tall over London? Er, yes – of course I jumped at the chance! I’ve always had a larger than life personality, but this is a new level, even for me.

“Where I grew up in Leeds, bingo was part of community life and a real Friday night ritual. Of course the bingo callers helped make the experience. I love performing to a crowd but have never been a caller; so it’s great for me to be part of the Costa Bingo fun.”

CostaBingo.com launched in 2009 became an instant success by pioneering the use of free bingo games. It also introduced a custom software layer that allows marketing-led innovations to run over the base Dragonfish platform. Costa allows players to play bingo for free and win real cash, a proposition that has clearly resonated with the social gaming community. The site grew to become one of the largest online bingo sites within just a few months of launch.

Costa Bingo is owned by BGO Entertainment, a privately held company. BGO began life in 2001 as a casino and poker affiliate, and grew into the largest supplier of casino traffic in the UK market. It operates a number of bingo brands including Costa Bingo, and also operates a multi-vertical online gaming site on proprietary software. It also recently opened a new slot machine studio headed up by a former top NetEnt executive.

Melanie Brown burst onto the world stage in 1996 as a member of the world’s best-known girl band, the Spice Girls. 100 million record sales later, the Spice Girls went their separate ways after becoming the most successful British band since the Beatles.

Since then Mel has had an extensive TV career, starring in the US primetime show “Dancing with the Stars”, and serving as a judge on the Australian “X Factor”. She is now a judge on the NBC show “America’s Got Talent” and lives in Los Angeles with her husband Stephan Belafonte, and daughters Phoenix, Angel, Madison and stepdaughter Giselle.