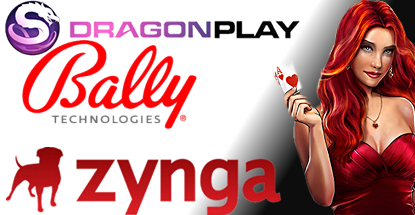 Gaming device maker Bally Technologies has agreed to acquire Israeli social gaming firm Dragonplay, the developers behind popular social casino games like Live Hold’em Pro. The deal will cost Bally $51m up front, plus a maximum of $49m over the next 18 months to retain certain key employees, with the total top-up dependent on Dragonplay’s ability to hit certain financial performance benchmarks. The move allows Bally to keep pace with the likes of rivals International Game Technology, whose DoubleDown Interactive division is among social gaming’s top performers.

The Tel Aviv-based Dragonplay currently boasts about 700k daily active users and 3m monthly actives. Dragonplay was formed in 2010 with an initial investment of just $650k, so to say that bet has paid off is a serious understatement. Bally CEO Richard Haddrill said Dragonplay had “proven remarkable foresight and leadership in the mobile space” and said Bally plans to use Dragonplay as a vehicle to launch its proprietary table game and video slots titles into the social gaming sphere.

ZYNGA STOCK TANKS AS CEO TALKS ‘CULTURAL CHANGE’ AT ZYNGA POKER
Meanwhile, former social game kingpin Zynga saw its share price tank on Thursday. Zynga shares dipped as low as $2.74 before closing at $2.97, down over 9% and a new low for the year to date. Shares have continued to fall in after hours trading. On Tuesday, Zynga CEO Don Mattrick announced the latest round of senior executive exits, including former VP of mobile Travis Boatman, former head of acquisitions Terence Fung and former head of Zynga’s Ville games Steve Chaing. But the market took little notice of these announcements, at least, not until Thursday morning.

On Wednesday, Mattrick gave a presentation at the Bank Of America Merrill Lynch Global Technology Conference. Mattrick didn’t appear to say anything all that controversial, unless some investors were still clinging to the misguided belief that Zynga retained any serious real-money gambling aspirations. Mattrick said real-money gambling “is not a principle area of focus for us as a company. We think that there is great business, great growth with our social casino slots and other ‘I want to feel lucky and have fun with my friends’ products.”

Mattrick also addressed recent changes to the company’s marquee Zynga Poker product. Mattrick noted that there had been “a cultural change” in the Poker team, as “the set of people who were leading that product when I joined aren’t there.” According to Mattrick, a leadership change was made after the previous team was asked for their views on “what it’s going to take to grow and … the things that we should build to complement the asset that we have.”

The new Poker team Mattrick installed is more focused “on how we can compete and win over multiple years” and is spending “much more time getting closer to consumers, closer to competitors.” The new Poker team is also having its work graded externally “versus having the studio people score their own work.” This shift improves “objectivity on where we are and getting people focused on delivering things that are better and unique.” The goal was to achieve better player engagement because “when they spend more time, they usually monetize to a higher level.”