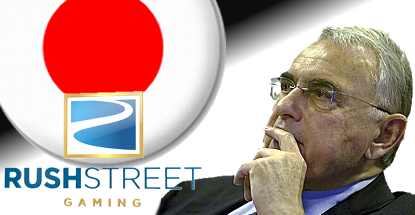 Rush Street Gaming is the latest casino operator to declare its interest in setting up shop in Japan once the country passes its long awaited casino legislation. Rush Street operates three regional casinos in the US – two Rivers Casinos in Pittsburgh and the Chicago area plus the SugarHouse in Philadelphia – and is owned by Chicago real estate titan Neil Bluhm (pictured), who Forbes estimated has a net worth of $2.6b.

While many of the big name operators sniffing around Japan are reaching for the brass ring that is Tokyo, Rush Street’s gaze is firmly fixed on Osaka. Bluhm told Reuters that Rush would spend between $4b and $5b to build its Osaka gaming joint and dismissed concerns that this sum couldn’t compete with promises by Las Vegas Sands and MGM Resorts to spend up to $10b on a Japanese project. “Sometimes people like to throw big numbers around in order to get picked.”

Bluhm claims to be having discussions with a range of potential Osaka-based partners and asuggested Sheldon Adelson’s stated preference for going it alone in Japan would also help level the playing field in Rush’s favor. Operators like Sands “are going to want to totally run the project. They are probably not used to having partnership relationships like we are.” (Bluhm’s differences with Adelson don’t end there: Bluhm is a strong supporter of Democratic causes, while Adelson basically pays the mortgage on the Republican-controlled House of Representatives.)

SO WHO’S GOT THE INSIDE TRACK IN JAPAN?
Wednesday brings the kickoff of the Japan Gaming Congress in Tokyo, where you won’t be able to swing a katana without hitting a casino hopeful (or three). Japan has yet to finalize its draft casino legislation but the accepted wisdom is that the country will authorize two ‘big’ integrated resort (IR) licenses covering major metropolitan areas like Tokyo and Osaka plus two ‘small’ licenses that will go to regional hubs like Hokkaido, Nagano, Nagasaki or Okinawa.

Last week, Union Gaming Research issued a report handicapping the field of contenders, listing Sands, MGM, Galaxy Entertainment, Genting Singapore, Melco Crown Entertainment, Wynn Resorts and Japan’s own SegaSammy Holdings as the favorites to win the two ‘big’ casino licenses. Bluhm would likely disagree, but the Union Gaming boys believe “any operator not appearing on this list … is unlikely to be a serious contender for one of the ‘big’ IR licences.”

With the casino legislation not yet set in stone, it’s unclear whether a company that goes after a ‘big’ license would also be allowed to pursue a ‘small’ license. But assuming these big casino firms don’t get greedy, Union Gaming suggests the ‘small’ license frontrunners are US firms Boyd Gaming and Caesars Entertainment, Cambodia’s NagaCorp, South Korea’s Paradise Entertainment and local lads Dynam Japan.

Notable by its absence on either list is Japan’s pachinko giant Universal Entertainment, possibly because it has been struggling with a seemingly endless series of public relations black-eyes involving its resort casino project in the Philippines. This past week brought things to a new low after a former Universal employee claimed the company tried to buy his silence in order to frustrate investigations into Universal’s alleged bribery of Philippine gaming officials. At this point, it’s questionable whether corporate seppuku would be sufficient to redeem Universal’s reputation.