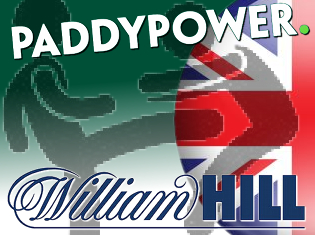 Paddy Power and William Hill aren’t making nice when it comes to alleviating the UK government’s concerns over the number of high street betting shops. The row started earlier this week when the Daily Mail quoted Hills CEO Ralph Topping saying he was “against betting shop clustering on social grounds.” Topping said betting shops “have always been part of the community” but agreed that political action was necessary “when the situation starts to alienate communities.”

While the number of UK betting shops has remained relatively constant at around 8,700 over the last decade, the economic meltdown of 2008 led to a lot of high street retailers shutting their doors. Bookies have been active in filling these retail voids, and the resulting ‘clusters’ of betting shops in areas of high foot traffic has convinced local councils and anti-gambling campaigners that betting shops are breeding like bunnies.

Last spring, London’s Newham Council rejected a Paddy Power application to open a new betting shop on the grounds that more than half its revenue was likely to come via fixed-odds betting terminals (FOBT), an alleged violation of the 2005 Gambling Act. Paddy was successful in overturning the Council’s ruling, but the very public fight only served to further inflame the betting shop controversy.

Just before Christmas, Labour Party leader Ed Miliband vowed to give local councils more power in determining whether to permit new betting shops to open in their neighborhoods. The matter was discussed in Parliament early in January, causing a tumble in bookies’ share prices after PM David Cameron suggested he shared Miliband’s concerns regarding the alleged dangers of FOBTs in these betting shops.

Topping suggested licensing authorities would be well within their responsibilities to impose a “cumulative impact test” to determine whether additional betting shops would bring about Armageddon. But Topping doesn’t support Miliband’s plan to allow councils to order existing shops to close and Topping “totally rejects” any further restrictions on either the number of FOBTs each shop can contain (currently capped at four) or their maximum wagering stakes (currently £100 per spin on category B2 machines).

FOR ONCE, PADDY POWER ISN’T LAUGHING
Paddy Power’s head of retail Andy McCue has hit back at Topping’s bid to curtail future shop openings, calling it an “anti-competitive diversion.” Hills has around 2,400 shops currently operating in the UK, while Paddy has less than 250 but added 37 in 2013 and has ambitions to open more in order to compete with their UK rivals.

McCue also took issue with Paddy’s rivals dragging their feet on supplying FOBT data to the Responsible Gambling Trust (RGT), which is conducting a study on the machines in order to determine the extent of their threat to UK society. The Financial Times quoted McCue accusing “some of the big four bookmakers” (Hills, Ladbrokes, Betfred and Coral) of being “unwilling to expedite the research.” McCue’s criticism comes as the bookies head into a Thursday meeting with Helen Grant, head of the Department for Culture, Media and Sport, the political body that oversees gambling issues in the UK.

At Thursday’s meeting, Grant is expected to order bookies to hand over an FOBT for researchers to study. In December, the RGT complained that no bookies had “volunteered a betting shop for research.” On Wednesday, the Guardian quoted ministerial sources saying bookmakers were “working to make a machine available for research purposes in a manner that is fair and impartial.” A spokesman for the Association of British Bookmakers (ABB) rejected suggestions that the bookies had “refused access to gaming machines,” insisting that the industry supports “a coordinated approach to machines research.”