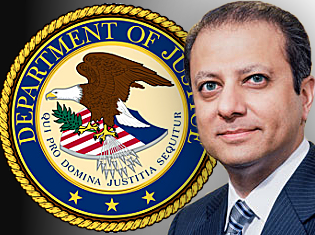 A US federal judge has criticized Preet Bharara (pictured) for being a drama queen. Specifically, US District Judge Richard J. Sullivan accused the US Attorney for the Southern District of New York (SDNY) of overegging the drama in press releases that accompany prosecutions brought by Bharara’s office, which include high-profile gambling cases such as the Black Friday indictments. Speaking last month at a conference organized by the Practising Law Institute, Sullivan said Bharara’s press releases contained melodramatic language that “seems to be designed for tabloid consumption.”

Sullivan wondered if such language was “appropriate at the pre-conviction stage,” given its potential to taint a jury pool if/when a case actually comes to trial. SDNY deputy attorney Richard Zabel, who was on the same panel as Sullivan, rode to Bharara’s rescue, saying the amped-up wordplay was intended “to be quoted and draw attention to the case” since the average man on the street “can’t read a complaint.” Can’t or won’t?

AND SLAVA MAKES TWELVE…
Speaking of the SDNY, there’s been more activity stemming from the April takedown of that Taiwanchik-Trincher poker/sportsbetting ring. Late last month, Slava Greenberg pled guilty to participating in a racketeering conspiracy, leaving him facing a maximum of 20 years in stripes when he’s sentenced on Feb. 27. Greenberg, who also agreed to forfeit an unspecified amount of cash, was the 12th member of the 34 individuals named in the indictment to admit his guilt, following similar pleas by (among others) Bryan Zuriff, William Barbalat, Kirill Rapoport, Edwin Ting and Justin Smith. (In Bharara’s defense, the press release announcing Greenberg’s plea deal contained little in the way of hyperbole.)

LEGENDS OPERATIVE LASSOED
In other gambling-related prosecution news, Michele Lasso-Barraza pled guilty on Friday to conspiracy to launder monetary instruments on behalf of Philip Gurian, who pled guilty to a similar charge in October for his role in the Legends Sports operation. In April, indictments were unsealed against the Panama-based Legends Sports and some 34 individuals, leading to the revocation of Legends’ Panamanian gaming license and the transfer of Legends accounts to Costa Rica-based WagerWeb Sportsbook. Lasso-Barraza, a Panamanian national, faces deportation, a $500k fine and a maximum sentence of one-and-a-half years in prison when she’s sentenced Feb. 28. Gurian will learn his own fate on Feb. 6.

ALL IN THE GAMBINO FAMILY
Over in Connecticut, Joseph Borea was sentenced on Friday to 33 months in prison for his role in an online credit betting operation that was shut down in June 2012. Borea was one of 20 individuals charged in relation with the operation, which had ties with the Gambino crime family and utilized Costa Rica-based websites including 44wager.com. In August, Borea agreed to plead guilty to one count of racketeering, pay a $50k fine and forfeit $75k in gambling proceeds. Eighteen of the 20 defendants have so far pled guilty, including Richard Uva, who was sentenced in October to 46 months in prison and ordered to forfeit $250k.