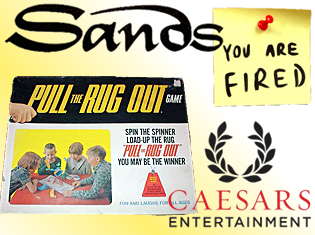 Casino operator Las Vegas Sands has lost and/or gotten rid of the number two exec at its dominant Sands China division. On Tuesday, a Sands China official told the Wall Street Journal that chief operating officer David Sisk “has resigned and is no longer with the company” although other sources told the WSJ that Sisk was asked to submit his resignation.

Sands offered no further insight into who would handle Sisk’s duties going forward. On Friday, Sands also lost Hugh Fraser, its VP of casino operations in Macau, although Fraser left of his own accord to become general manager of Echo Entertainment’s The Star casino in Sydney, Australia. Sands China has been the chief engine of the US casino firm’s growth over the past few years and is nipping at the heels of SJM Holdings for top spot among Macau’s six casino concessionaires.

Sisk apparently got into a power struggle with Sands China CEO Edward Tracy, both of whom joined Sands China following the purge of former CEO Steve Jacobs. Given the alleged acrimony surrounding Sisk’s exit, it remains to be seen whether Sisk will now become as big a burr under Sands’ saddle as Jacobs has proven since he was unceremoniously forced out in 2010.

CAESARS TARGETED BY SHORT SELLERS AND STATE TREASURERS
Prior to joining Sands, Sisk had done stints at both Wynn Resorts and Caesars Entertainment. Caesars’ shares experienced a bit of a hiccup on Tuesday, experiencing a slight decline all day before plunging 5% over the course of five minutes, then recovering just as quickly to close out the day down 2% at $21.05.

Theories behind what sparked the rapid downturn included a warning on Monday from Bill Mandel, publisher of the Openings and Closings In Las Vegas newsletter, who advised prospective casino visitors not to put down any deposits on room reservations at Caesars’ properties or delay cashing out any casino chips. Mandel justified his warning on “an abundance of caution” given the likelihood of the financially struggling casino firm declaring bankruptcy in the not too distant future.

However, Mandel’s warning followed a report by StockRatingsNetwork.com that Caesars was the subject of an unusually high volume (223% higher) of call options on Monday. Benzinga has since offered an unsubstantiated conspiracy theory that the newsletter warning was planted by short sellers looking to trigger a panic sell-off.

Both these incidents were preceded on the weekend by a Reuters report that US public pension funds were pressuring Caesars’ private equity owners to share more of the millions of dollars in “monitoring fees” they were drawing from the cash-strapped casino firm. TPG Capital LP and Apollo Global Management LLC earned a $200m ‘transaction fee’ for taking Caesars private in 2008 and continue to draw an annual $30m from Caesars’ accounts, despite the fact that the $6b in equity the TPG-Apollo pairing had invested in the buyout was now worth barely a third of its original value.

Rhode Island General Treasurer Gina Raimondo, whose state’s Employees’ Retirement System has $20m tied up in TPG Partners, has asked TPG to divvy up some of those management fee millions among their lesser stakeholders. Raimondo described the “clear misalignment of our interests” in the venture as “problematic,” and while she realized that investment involved risk, Raimondo expected the partners “to sink or swim together.”

Similar sentiments were expressed two months ago by Oregon State Treasurer Ted Wheeler, whose state’s Public Employees Retirement Fund has a combined $500m invested in the two equity firms. In May, four private equity groups holding Caesars IOU’s were lobbying hard to force TPG-Apollo to restructure Caesars ahead of debt obligations coming due in February 2015. Caesars is in the process of spinning off its Interactive division into a separate entity that would be largely insulated from the fallout of a Caesars bankruptcy filing.