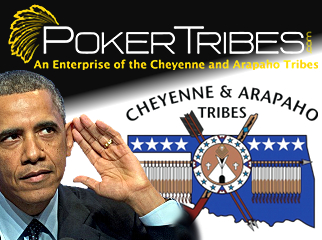 Oklahoma’s Cheyenne & Arapaho Indian tribes have urged US President Barack Obama not to interfere with their plans to offer real-money online gambling to customers based outside the US. In April, the tribes inked a pact with Oklahoma Gov. Mary Fallin to give the state 20% of the revenue generated from international players via the Universal Entertainment Group-powered PokerTribes.com site.

Indian Country Today Media Network reported that the tribes have begun running ads urging federal lawmakers to ignore the “hypocrisy” of tribes in other states with more lobbying clout. On Thursday, Cheyenne & Arapaho Gov. Janice Prairie-Chief Boswell said there was “no reason for the federal government to intervene in what should be a matter between the tribe and the state. We hope that the Obama administration allows this process to proceed, which will show that all tribes can get a fair chance in Washington.”

There is as yet no established precedent for a US-based online gambling entity serving international customers. New Jersey Division of Gaming Enforcement director David Rebuck is presiding over the dawn of his state’s online gambling regime, and he recently admitted that state law didn’t afford him the ability to “enter into treaties” with foreign governments. Indian tribes consider themselves sovereign nations, and therefore claim the right to enter into such treaties. But as evidenced by their Obama lobbying, even the Cheyenne & Arapaho aren’t convinced their online experiment won’t receive some kind of Department of Justice pushback.

Legality aside, the fiscal feasibility of the Cheyenne & Arapaho plan has been called into question. One month after the tribes inked their pact with the state, Pechanga.net owner Victor Rocha told CalvinAyre.com he wasn’t sure the tribes had “thought it through.” While stressing that he was only expressing an opinion, Rocha noted that with the state taking 20% off the top, margins would be non-existent. Or, as Rocha put it, “might as well just stick them on a raft and shove them out on the ocean.”

SOCIAL GAMING NOW, REAL-MONEY LATER
PokerTribes.com began life as a social gaming site, something more and more tribes are experimenting with as they wait for some sign of life on the federal legislative EKG. This week saw the Snoqualmie Casino in Washington state sign up for the Play4Fun Network iGaming and Marketing platform offered by WMS Industries’ online division Williams Interactive. The B2B white label product, which has already gone live at tribal casinos in Iowa, Michigan and Minnesota, offers casino games plus an 888 Holdings-powered poker product for desktop computers as well as iOS and Android phones and tablets.

The Snoqualmie aren’t the only Washington state tribe to hop onto the free-to-play bandwagon. In March, the Confederated Tribes of the Colville Reservation signed up for Bally Technologies’ free-play iGaming platform, which includes a poker product powered by Amaya Gaming’s Ongame Network. There’s something ironic about Washington tribes offering any kind of online poker, given that the state made playing real-money online poker a Class C felony in 2010 largely based on tribal fears that online gambling would cut into their lucrative brick-and-mortar business. Tribes are now positioning themselves for real-money play at the switch of a button. What was that about ‘hypocrisy’ again?