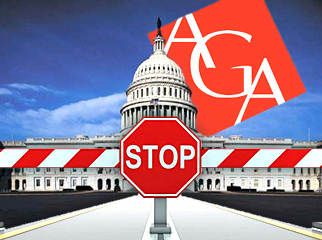 Rep. Peter King (R-NY) was trawling the hallways of Congress this week, looking for support for the online gambling bill he unveiled in June. King distributed a letter to his fellow Washington pols on Tuesday, reminding them that “the choice to play games of skill or chance should be a personal freedom, and not something dictated by the government.” Unlike the warmed over poker-only bill introduced last month by King’s fellow House Republican Joe Barton, King’s Internet Gambling Regulation, Enforcement and Consumer Protection Act of 2013 seeks to legalize all forms of online gambling except sports betting.

King’s bipartisan letter, co-signed by bill co-author Michael Capuano (D-MA), warned that the current state of legal online gambling was “not uniformly regulated, the operators are not licensed and consumers lack protection from fraud and abuse.” As federal politicians, they see no other option than a federal solution to the problem of “conflicting and inconsistent” state-level legislation, which they warn provides “a perverse incentive for a race-to-the-bottom on standards to attract gaming operators and revenues.”

The letter’s pejorative lexicon regarding state-level initiatives will be well familiar to anyone within earshot of the American Gaming Association (AGA) ever since their road-to-Damascus epiphany on internet gambling three years ago. The AGA’s warning of the perils of state-level legislative ‘patchwork quilts’ has grown even louder as more and more states realize they can legislate infinitely faster than their federal counterparts.

But while a federal solution remains the AGA’s gold standard, the 113th Congress is on pace to pass the least number of bills in Washington’s modern history. The amount of legislation passed isn’t necessarily an accurate reflection of Congressional productivity, but no less a personage than House Speaker John Boehner recently suggested Congress shouldn’t be judged on how many new laws it created but “on how many laws we repeal.” (Yo, John… Any chance you’ll get around to repealing the UIGEA?) Adding illogical weight to Boehner’s boneheaded argument, the GOP-controlled House of Representatives somehow found time in the final week before their month-long August recess to pass their ‘repeal Obamacare’ bill for the 40th freaking time.

The AGA recently staged its annual ‘Washington Fly-In’ event, but the casino bosses that participated in this most recent press-the-flesh parade are belatedly catching on that this do-nothing Congress isn’t likely to actually do anything about relaxing online gambling prohibitions anytime soon. Newly installed AGA boss Geoff Freeman subsequently observed that “there will come a time, if Washington does not act, that the AGA will be driven to change its approach.” Freeman hopes the AGA won’t be forced down this road, but said it was only natural that the AGA’s position was “certain to evolve” in the wake of federal futility.

In May, former Nevada congressman and sometime Poker Players Alliance lobbyist Jon Porter warned that past federal legislative efforts had come to naught because the big Nevada casino firms pushing the bills had sought to undermine the interests of “powerful groups” such as Indian tribes and state lotteries. That statement was more than a bit ironic, given Porter’s 2012 testimony before the Senate Committee on Indian Affairs in which he castigated state lotteries for wanting to take their scratch card business online in a form that would mimic slot machine play.

Porter issued a string of tweets this week saying that until all stakeholders managed to coalesce behind a single unified message on online gambling, there was little incentive for Congress to support any legislative effort. Porter said “EGaming companies should spend their time telling Congress about safeguards not which group deserves the competitive edge.” Last month’s somewhat comical Senate hearing on internet gambling did little else but preach the need for safeguards to combat Al Qaeda’s poker-playing hordes, but whether the big casino companies will ever prove willing to share their online toys with anyone outside their ranks is a far bigger hurdle to clear.