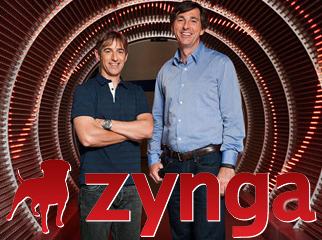 Struggling social game developers Zynga have announced that CEO Mark Pincus (the short guy on the left) will step down from the chief executive role, to be replaced by Don Mattrick (pictured far right), the man responsible for running the Xbox videogame business for Microsoft Corp. Pincus issued an email to Zynga employees claiming that he’d always said that “if I could find someone who could do a better job as our CEO I’d do all I could to recruit and bring that person in. I’m confident that Don is that leader.” Pincus will retain his chairmanship of Zynga as well as his voting control over 61% of the company’s stock.

Mattrick, who also did a 15-year stint at videogame outfit EA, released a statement describing Zynga as “a great business that has yet to realize its full potential.” Mattrick said Pincus’ “pioneering vision and mission to connect the world through games is just getting started.” Rumors of the management shakeup, initially tipped by AllThingsD and confirmed by Zynga after the markets closed, sent Zynga shares up over 10% on Monday. The stock is up a further 5% in after-hours trading as of time of writing, but still off nearly 70% from its initial public offering price.

Mattrick was reportedly the sole candidate Pincus considered installing in his place, and the two had been working out the scope of their new working relationship for months. The plan is for Mattrick to run day-to-day operations while Pincus focuses on product development. Curiously, neither Pincus nor Mattrick made any mention of Zynga’s real-money gambling ambitions in their statements. Zynga is set to reveal its latest financial report on July 25.

ZYNGA DETHRONED AS SOCIAL CASINO KING
The news came on the same day that Eilers Research declared that Zynga had been dethroned as social casino game publisher kings. VentureBeat reported that the new ruler of the $1.2b social casino game market is Caesars Interactive Entertainment (CIE), which Eilers says controls 18.6% of the sector thanks to its acquisitions of Playtika and Buffalo Studios. Zynga, meanwhile, has slipped to 15%, barely above the 14% share held by International Game Technology and its DoubleDown Casino social gaming offshoot. IGT”s rival slot maker WMS, whose social casino offerings include the popular Jackpot Party app, is well back at #4, followed by Bash Gaming and GSN Casino in a dead heat for #5.

Eilers predicted the social casino market would grow 67% in 2013 for a total value of $2b, although Facebook’s total social casino revenues slipped 2% to $309m in the most recent quarter. The top three social casino outfits derive the vast majority of their revenues from Facebook, in some cases by a ratio of 3:1 compared to their mobile revenues. Big Fish Games’ Big Fish Casino ranked top dog among standalone mobile social casino apps with an estimated $14.5m in quarterly revenues, not far off CIE’s total mobile revenues and much more than that of Zynga and IGT.