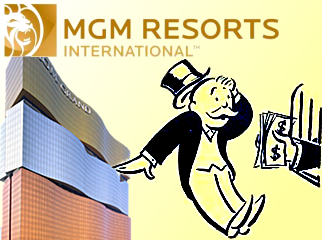 US brick-and-mortar casino operator MGM Resorts International posted its best quarterly report in five years on Thursday, pushing its stock price up 5.4% by the close of trading. For the first three months of 2013, MGM posted revenue of $2.35b (+2.8%) and a $6.5m profit. The latter number is a modest tally for a company of MGM’s scale, but it’s a far sight better than the $217.2m loss MGM recorded in Q1 2012.

MGM’s US properties saw revenue rise 3% to $1.49b and earnings rise 12% to $361m. Table games revenue was up 16% thanks to win rate rising from 18.7% last year to 21.9%. Overall domestic slots revenue was off 2%, despite a 4% boost in slots revenue at MGM’s Las Vegas strip properties. CityCenter was a star performer on the domestic front, with revenue up 32% to $308m and earnings nearly tripling to $93m. CityCenter’s Aria casino enjoyed a serious uptick in table game hold, rising to 28.3% from 16% the previous year.

MGM China, in which MGM Resorts holds a 51% stake, saw revenue at its lone casino in Macau rise 6% to $747.5m while earnings rose 10% to $180m. VIP table game turnover rose 15%, although hold slipped to 2.8% from 3.2% last year. Mass market table and slots win rose 26% and 19% respectively. With one Macau casino contributing nearly half as much revenue as MGM’s dozen or so Las Vegas properties combined, MGM can’t wait until its new casino on Cotai opens for business in 2016. As for MGM’s decision to end its partnership with Asia Coast Development Ltd. on a resort casino on Vietnam’s Ho Tram Strip, CFO Daniel D’Arrigo told analysts that MGM doesn’t “have any intentions of revisiting that decision.”

MGM CEO Jim Murren told analysts that the uptick in Las Vegas revenue suggested that “the domestic customer is coming back, they’re spending a bit more money.” That directly contradicts assertions made on Wednesday by Caesars Entertainment CEO Gary Loveman, who blamed his company’s across the board revenue declines on pessimistic consumer sentiment. MGM’s long-term debt increased slightly during Q1, rising $100m to $13.7b, about two-thirds of Caesars’ current debt load. MGM paid $205m in interest on its debt during Q1, less than half of Caesars’ latest quarterly vig.

As for MGM’s online poker joint plans, Murren told analysts that while he still preferred a federal solution, he acknowledged that all the progress is being made at the state level. “We will participate in that as well, whether it’s in Nevada, New Jersey or elsewhere.” MGM entered into an online poker joint venture with Boyd Gaming and pan-European online operator Bwin.party digital entertainment, and MGM and Boyd are 50/50 partners in Atlantic City’s Borgata casino (although MGM is still awaiting New Jersey regulators to okay its reapplication for a gaming license after MGM decided to walk away from AC in 2010).

Despite Murren’s assertions, it seems MGM isn’t sure it wants to follow the lead of Ultimate Poker, the first Nevada-licensed online poker company to offer real-money play to Nevada residents. D’Arrigo told Reuters the company still needed “to make an assessment on the cost to operate [in Nevada]. We haven’t ruled it out, but we haven’t given it a green light either.” While MGM and Boyd have received Nevada interactive gambling licenses, bwin.party CEO Norbert Teufelberger has determined that his company has no interest in operating in Nevada’s dinky market, so MGM may need to explore a second joint venture if it decides to take the Nevada plunge.