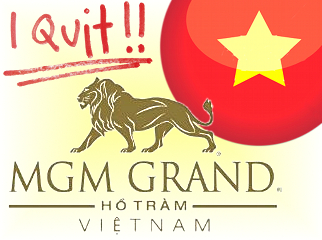 Vietnam’s first resort-casino project has hit yet another snag as MGM Resorts has walked away from its contract to manage the facility. The MGM Grand Ho Tram resort was a co-venture of MGM and Asian Coast Development Ltd. (ACDL), a Vancouver-based company in which US casino operator Pinnacle Entertainment holds a minority stake. MGM subsidiary MGM Hospitality had been tasked with running the facility, but the development has been fraught with delays and cost overruns.

On Thursday, MGM filed notice with the US Securities and Exchange Commission that it was exercising its right to cancel its contract due to the project having failed to achieve certain milestones by March 1. In November, ACDL defaulted on a contract with the Ba Ria-Vung Tau provincial government due to ACDL’s failure to meet certain construction deadlines. That led a consortium of Vietnamese banks to suspend funding of a $175m credit facility.

ACDL CEO Lloyd Nathan issued a statement thanking MGM “for its assistance in the hiring and training of our 2,000-strong team of Vietnamese hospitality professionals. We are delighted to have completed the construction of the first phase of our resort.” In addition to gaming facilities, the Ho Tram resort’s plans include 541 hotel rooms, nine restaurants and luxury retail outlets.

ACDL says the Ho Tram resort’s planned Q1 opening will have to be pushed back until a new partner can be brought on board. ACDL, which is majority owned by the Harbinger Capital hedge fund, claims it has already initiated discussions with alternate partners. Harbinger founder Philip Falcone said the hedge funders remain “as committed as ever” to the project.

MGM’s withdrawal is a significant blow to Vietnam’s desire to tap into the Asia-Pacific’s lucrative resort-casino market. Malaysian casino operator Genting abandoned its own Vietnam plans in August after failing to convince the government to waive its ban on local residents entering casinos. Las Vegas Sands has voiced similar concerns as well as a preference for building in Vietnam’s major cities, rather than along the country’s coastline, where major infrastructure is lacking.

PINNACLE SELLS AC LAND AT A DISCOUNT
November’s move by the Vietnamese banks prompted Pinnacle to warn the markets that its entire investment in the project could be in jeopardy. Pinnacle paid $95m for a 26% stake in ACDL in May 2011, but Pinnacle’s most recent financial results included a $25m writedown related to the Ho Tram project. Possibly motivated by the need for a quick cash infusion, Pinnacle announced on Thursday that it has sold its 20-acre vacant lot in Atlantic City to an undisclosed buyer for $30.6m. The site was the former home of the Sands Casino Hotel, which Pinnacle bought in 2006 for $270m, then imploded as the first stage of a planned $2b casino. Those plans were scrapped when the US economy imploded and Atlantic City began its unbroken six-year streak of declining gaming revenues. The deal, which is expected to close this month, is subject to the unidentified buyer being able to secure the necessary financing.