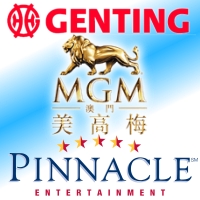 Pansy Ho is set to become a rich (okay, richer) woman now that MGM China Holdings has priced shares in its Hong Kong initial public offering at HK$15.34 (US$1.97), the top end of the range pitched to investors. MGM China is a 50/50 joint venture between Ho and MGM Resorts International, but it’s Ho who is selling off 21% of her stake, meaning all net proceeds from the sale of the 760m shares up for grabs will go to her. The 48-year-old Ho, daughter of aging Macau casino magnate Stanley Ho, has an overallotment option to sell an additional 3%, just in case she blows the $1.5b IPO dough at one of her own baccarat tables or something. Bank of America, JPMorgan Chase and Morgan Stanley are the global coordinators for the sale, while BNP Paribas, CLSA Ltd., Deutsche Bank AG and Royal Bank of Scotland are joint bookrunners. The mad dash for shares is expected to kick off June 3.

Genting Bhd. has reported a Q1 revenue boost of 57% and net income of $271m, a 255% increase over Q1 2010. The Malaysia-based Genting, Asia’s third-biggest casino operator by market value, owes much of the performance boost to the opening of Resorts World Sentosa in Singapore in February of last year. Genting Singapore Plc posted a Q1 profit of $246m compared to a loss of $320m last year. A Genting spokesperson claimed the Singapore operation “has been able to attract record volumes of overseas visitors” and that the casino’s VIP business “continues to be a major contributor to gaming revenue.” Revenue at Genting’s UK casinos was also up, but the hilltop casino in their home territory of Malaysia saw numbers fall due to lower volume and higher payouts to VIP gamblers.

Las Vegas-based Pinnacle Entertainment Inc., which operates seven casinos in the US, has announced its intentions to expand operations overseas in Vietnam. Pinnacle is spending $95m to acquire a 26% equity interest in Vancouver-based Asian Coast Development (Canada) Ltd., the developer of the Ho Tram Strip beachfront resort complex southeast of Ho Chi Minh City. MGM Resorts is behind the first hotel/casino scheduled to open on the Ho Tram Strip in 2013, featuring 90 table games and 500 slot machines. Pinnacle has a management agreement good through 2058 for the second Ho Tram Strip resort. Pinnacle CEO Anthony Sanfilippo believes “the phenomenal success and continued strong growth of destination integrated resort and gaming facilities in Asian markets are indicative of the demand for quality gaming entertainment options in Asia.”