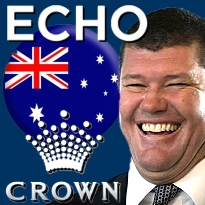 Australian casino operator Echo Entertainment has reportedly selected non-executive director John Redmond as its new CEO. Redmond, an American who was once CEO of MGM Grand Resorts, was added to Echo’s board just over a year ago. Redmond is expected to take over at the end of the month from exiting CEO Larry Mullin, who formerly worked at the Borgata in New Jersey. It’s been a turbulent year for Echo execs, with chairman John Story having resigned this summer after (a) presiding over a scandal involving the former boss of Echo’s Sydney casino The Star and (b) getting into a pissing match with Crown Ltd. boss James Packer, who holds 10% of Echo shares and has applied to boost that stake to 25%.

ECHO V. CROWN SYDNEY WAR OF WORDS CONTINUES
Packer may never follow through on that bid to up his Echo stake now that Crown’s bid to construct its own Sydney casino is proceeding apace. Crown’s plans have drawn fresh criticism from Echo execs, who currently enjoy a monopoly on the Sydney casino business set to expire in 2019. The Daily Telegraph quoted Echo CFO Matt Bekier saying Australia was “a mature gaming market. If you cut the gaming earnings too many ways you can’t invest in iconic developments and the non-gaming and tourism infrastructure you really need to create a reason for people to show up. If the purpose is to increase tourism and bring international tourists to a district, we think a one-casino policy best delivers that outcome.”

Packer fired back at Bekier’s comments, dryly noting that it was another example of the “small-minded thinking that has held Sydney back … Outbound tourism from Asia, and in particular China, is exploding … In the year 2000, just over 10m Chinese people traveled abroad. This number rose to 70m last year and is now estimated to reach 100m by 2015 … Sydney has to improve its tourist offering if we’re going to take advantage.” For what it’s worth, both The Star and Packer’s casino in Melbourne made the top-10 of Australian residents’ favorite locations to check-in via Facebook. (Number one? The Melbourne Cricket Ground.)

AUSTRALIA GAMBLING MARKET DECLINES, BUT ONLINE GROWS
Bekier may have had a point about the maturity of Australia’s gaming market, at least in terms of its domestic consumers. A Roy Morgan Research study showed total spend on all forms of gambling in the first nine months of the year fell $1.6b to $16.9b. That’s well off the $20b spend in the same period in 2010 and the $19.1b in 2003. Video poker (pokies) machines again accounted for the lion’s share ($10.2b) of gambling spend, but that’s a full $1b less than the previous year (works out to a $3m per day decline). Roy Morgan’s international director of tourism, travel and leisure Jan Ianniello says the number of active pokie players fell 200k to 4.4m this year, down from the peak of 5.5m in 2002. However, online gambling spend increased from $928m in 2010 to $1.1b this year.

DO YOU, JAMES PACKER, TAKE THIS CASINO LICENSE?
Citigroup has estimated that the new Sydney casino would add $300m to $400m to Crown’s bottom line once the joint opens in 2019. Meanwhile, the approval process for Packer’s ‘unsolicited proposal’ to build his Sydney cash machine is viewed by many as a fait accompli, based in part on the revelation that the NSW government rewrote regulations that allowed Crown’s application to bypass a competitive tendering process and news that the casino would benefit from a sweetheart tax rate. The belief that the fix was in has now been further bolstered by news that David Murray, the head government official assessing the project’s merits, was a guest at Packer’s wedding to Jodhi Meares in 1999. Greens MPs have called for Murray to stand down from the approval role to avoid conflict of interest suspicions, but Murray has refused, saying “I think just about everyone in town was at that wedding.”

Packer seems almost incapable of taking a bad step in Australia these days. Last week, his Crown casino in Perth received the nod from the Gaming and Wagering Commission to add 500 pokies over the next five years and 100 more gaming tables over the next four years. Once complete, the joint’s total gaming offering would amount to 2,500 electronic gaming machines and over 300 gaming tables. All Crown has to do in return is complete construction of an adjoining six-star hotel.

PACKER ASKS THE NEVADA SUPREME COURT FOR A BREAK
Outside Australia, Packer’s 2012 hasn’t been entirely golden, as his and Crown’s aborted foray into the US market continues to come up snake-eyes. In September, Packer/Crown lost a bid to dismiss a lawsuit filed in 2010 by a group of big-money lenders who claim Packer/Crown misled them as to the dire finances of the never-finished $2.9b Fontainebleau Las Vegas project. Packer claims that stillborn project was a victim of the global recession, which resulted in the cancellation of nine-figure loan commitments from Bank of America and other high-profile lenders. A group of 46 lenders left holding $700m in Fontainebleau debt claimed Packer, Crown and developer Jeffrey Soffer kept two sets of books in order to hide $400m in cost overruns before the project went bankrupt. Crown itself lost $279m as a result of Fontainebleau’s failure to launch.

Last month, Packer/Crown filed an appeal with the Nevada Supreme Court over the Clark County District Court’s refusal to dismiss the case, arguing that the ruling “if left uncorrected, is likely to chill foreign investment in Nevada.” According to Vegas Inc., Crown attorneys cited a US Commerce Department study detailing concerns that America’s overly litigious environment – in particular the “unpredictable and unfamiliar nature of liability” – was causing international investors to question the value of doing business in the US of A.