Home / Casino / Crown’s Packer on casinos: ‘Fuck, this must be a good business!’ 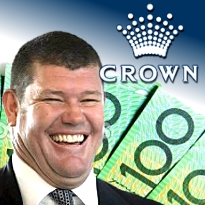 Just days after New South Wales’ opposition Labor Party added its support to Crown Ltd.’s bid for a second Sydney casino license, NSW Premier Barry O’Farrell’s cabinet has indicated it will move Crown’s “unsolicited proposal” to the “detailed consideration” stage of the approval process. This next stage, which includes a financial assessment of Crown’s desire to build a VIP-only casino in Sydney harbor’s Barangaroo development, will be concluded early in 2013. While Crown’s license wouldn’t take effect until November 2019 to avoid breaking the terms of the exclusive license granted to Echo Entertainment’s Star Casino, news of Crown’s coup sent Echo shares down 3.7%, the stock’s biggest drop in a month.

Echo execs tried to put on a brave face at the company’s annual general meeting, which was unfortunately timed for the same day Crown got its good news. Echo chairman John O’Neill criticized the government’s apparent disinterest in calling a tender on the second Sydney license, saying Echo itself wouldn’t mind a second Sydney casino. Echo is also hoping to win approval from the government in Queensland to build a second casino in Brisbane. Echo’s existing Brisbane casino and its Jupiters casino on the Gold Coast have underperformed in the first 16 weeks of its fiscal year, while the Star has seen revenues rise 27.5% over the same period. Echo’s overall revenues were up 12.9% over the same period in 2011, but O’Neill only just won re-election to the chairman’s seat after the process went to a ballot.

While O’Neill was fending off dissatisfied shareholders, Crown boss James Packer was holding court at the Museum of Contemporary Art. At a dinner organized by the Australian Financial Review, Packer gave an address in which he rubbished O’Neill’s desire for a second Sydney casino, saying it was “an admission that their product is not good enough because we’re certainly not looking for other places in Melbourne or Perth [two cities in which Crown operates casinos].” Packer also dismissed concerns that the second Sydney license wasn’t going to tender by claiming that his project would have won such a contest if one had been held. (In Packer’s world, Crown is like The Borg: Resistance is futile. You will be assimilated.)

So the stage is increasingly set for a 2020 showdown between Crown and Echo over who will win the fight for Sydney’s share of the Asian high-roller market. At the same dinner function, Packer was interviewed by the AFR’s James Chessell, who got Packer to reveal that it was his father Kerry, a renowned high-roller, who instilled in his son an appreciation for the gaming industry. “I spent a lot of time in casinos with my dad and I ended up thinking ‘fuck, this must be a good business’. And I say that with massive respect to my dad.”