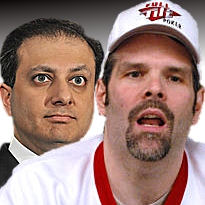 Attorneys for former Full Tilt Poker director Howard Lederer have responded to the US Department of Justice’s response to Lederer’s bid to have his Black Friday civil charges tossed. If you’re just joining us, Lederer’s lawyer Elliot R. Peters sent Judge Leonard B. Sand a letter earlier this week, asking for a status conference to consider whether the ‘DiCristina order’ – aka the recent US District Court ruling that poker was predominantly a game of skill and thus not prosecutable under the federal Illegal Gambling Business Act (IGBA) – had undercut much of the DoJ’s rationale for prosecuting Howard. Preet Bharara, the US Attorney for the Southern District of New York, responded by suggesting Howard should insert one piece of his anatomy into another piece, and also that Howard should bend over, grip his ankles and prepare to receive even more justice when the DoJ files a second amended complaint by Sept 10 which would include “additional statutory grounds for forfeiture and other relief.”

In a letter to Sand dated Friday, Aug. 31, Peters said he couldn’t help but notice that Bharara had failed to dispute Peters’ assertion that the IGBA was central to the case against Howard, and that Bharara had similarly failed to indicate whether the DoJ intended to appeal DiCristina. Peters referred to this unresolved DiCristina issue as “the elephant in the room” which, for a pleasant change, wasn’t a reference to the size of Howard ‘The Professor’ Lederer’s ego. Peters humbly suggested that Judge Sand might want to un-muddy these waters “before the parties and Your Honor expend resources on a new round of motion practice.”

Peters also took a stab at Bharara’s threat to file fresh forfeiture theories – “presumably theories that were deemed unworthy of inclusion in the original complaint” – effectively saying Bharara was out of ammo. Peters said the net effect of (a) DiCristina and (b) the DoJ’s Dec. 2011 opinion that poker fell outside the scope of the Wire Act meant that “any new theories the Government may now conjure will be more attenuated, more legally flawed and likely more problematic that its previous efforts have been.” We eagerly await Bharara’s response, which Peters will likely find in his mailbox when the IRS notifies him it has decided to audit his tax returns for the past seven years.

COULD THIS BOOK END THIS DEBATE?
The often conflicting and always confusing myriad of gaming laws out there is fertile ground for these sort of he-said/Preet-said debates. Thankfully, there’s an antidote to this nuttiness in the form of a new book – Gaming Law In A Nutshell – written by Gambling And The Law author (and CalvinAyre.com contributor) Professor I. Nelson Rose and Walter T. Champion Jr. (author of Sports Law In A Nutshell, now in its fourth edition). This 442-page book addresses “all forms of wagering, legal and illegal” and has “separate discussions of many jurisdictions, including Nevada, New Jersey, Macau, Canada, and other countries; Indian and charity gaming; taxes; intellectual property” and much, much more.

Copies of Gaming Law In A Nutshell are available via GamblingAndTheLaw.com. The book is reasonably priced, so even though the DoJ may have frozen some of Howard’s bank accounts, he can likely still afford to buy a copy for each of FTP’s former players, considering he received $42m in disbursements from FTP in the four years preceding Black Friday. And Preet can just charge it to the taxpayers, that is, unless Romney’s elected and cuts off the government’s credit cards, so best order before November!