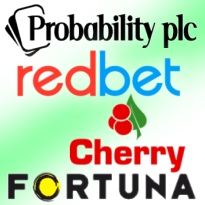 Swedish online gaming operator Cherry AB (known as Cherryföretagen before May 9 of this year) continued its winning ways in Q2 2012, posting strong growth across all facets of its operation. Overall turnover rose 5% to SEK 115.5m (€13.8m) resulting in a four-fold increase in profits to SEK 7.6m (€910k). Earnings at Cherry’s online division, which includes the PlayCherry site and EuroLotto, rose 156% to SEK 8.7m. The Restaurant Casino division delivered a “very solid result”, with turnover up 7% and earnings up 63% to SEK 2.6m. Cherry’s Maritime Gaming business turned profitable despite “challenging conditions in southern parts of Europe,” contributing earnings of SEK 300k compared to a 100k loss in Q2 2011. Looking ahead, Cherry has applied for a Malta gaming license and has high hopes for the upcoming launch of Euroslots.com in new European markets.

Fellow Swedes Redbet Holding AB – which operates Redbet.com, Optibet.lv, HeyPoker.com, WhiteBet.com, GoldClubCasino.com and TotalPoker.com – had a somewhat more subdued Q2 than Cherry, posting a profit of just SEK 200k (€24k) despite a 59% rise in revenues to SEK 24.5m. That said, Q1 2011 produced a net loss of SEK 1.8m, so focus on the positives, people. Casino produced 45.3% of Q2’s total gaming revenues, with betting at 29.4% and poker at 25.3%. Redbet CEO Ciaes Hallen, who took control of the good ship Redbet in May, said revenues were “almost unchanged” on a sequential quarter basis, but compared to 2011, casino revenues have risen 138%, betting is up 47% and poker up 6%. Player deposits were also up 42% over Q2 2011, while the total registered customers figure nearly doubled to 346k and active customers went from 20,953 in 2011 to 43,376 this year.

Czech betting operator Fortuna Entertainment Group (FEG) saw its shares slump on Thursday after reporting a 15.1% decline in earnings to €10.1m and a 35% decline in profits to €5.62m for the first six months of 2012. FEG’s numbers were dragged down by higher tax rates and a €3.3m operating loss related to its Czech lottery project, which is fighting rival Sazka AS for market share. Meanwhile, FEG’s betting operations are kicking ass, recording a 9.6% rise in turnover to €229.1m and a 15% rise in gross win to €55m. FEG’s Euro 2012 turnover amounted to €17m — €8.4m via its Czech Republic operation (42% of which was placed online); €4.7m from Poland (14.2% online, despite the online operation only being active for five months prior to the tourney) and €3.9m from Slovakia (38% online). FEG CEO chairman Wilf Walsh said the Polish operation is “the fastest growing market in Fortuna’s portfolio.”

Shifting to the UK, AIM-listed mobile gambling specialist Probability released its fiscal year results for the 12 months ending March 31. Net gaming revenues rose 34% to £7.2m, helping Probability shrink its annual losses by 47% to £545k. First quarter revenues in FY 2013 are reportedly up 44% and July’s customer deposits set a company record – the product of an £800k TV ad buy that cut into 2012’s profits but will hopefully reap benefits down the road, as will the company’s upcoming entry into the Italian market following the July acquisition of domestic mobile operator Playyoo. Probability used the occasion to announce chairman Graham Parr’s retirement. Parr, who has been with the firm since 2006, will take up shuffleboard (or perhaps hang-gliding or strip-billiards) full-time in September.