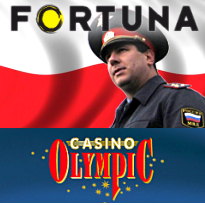 Fortuna Entertainment Group has become Poland’s first licensed online bookmaker after the company received its papers from the Ministry of Finance on Tuesday. Already online veterans in the Czech Republic and Slovakia, Fortuna launched its Polish fixed odds and in-running sports betting site efortuna.pl on Wednesday, sending its stock to a three-month high. Prior to its launch, Fortuna claimed to have received some 20k applications from anxious Polish punters looking to start betting as soon as possible.

Poland has denied a bail application by Moscow’s former deputy prosecutor Alexander Ignatenko, currently in Polish custody over his involvement in illegal Russian casino operations. Ignatenko fled Russia in spring of 2011 after two other prosecutors were arrested in a crackdown on 15 casinos operating in the Moscow area. The casinos, illegal under Russia’s 2009 plan to restrict gambling operations to four designated geographic zones, reportedly generated $5m to $10m in monthly revenues, some of which was allegedly kicked back to local justice officials for turning a blind eye. Ignatenko was arrested at a Polish ski resort on New Year’s Day carrying a bogus Latvian passport, and Russia has been trying to extradite him ever since. Ignatenko faces up to 12 years in the gulag if convicted.

Despite technological limitations, online gambling is flourishing in the former Soviet republic of Georgia. Top.ge, which quantifies Georgian web traffic, reports that gambling site Adjarabet.com is the second most popular Georgian online destination. (Top honors goes to movie/TV site Myvideo.ge.) Internet use is growing in Georgia at an annual rate of 18%, and while infrastructure limits most of that growth to cities, Eurasianet.org reports that the country folk are quickly catching on to the appeal of USB modems. While the Georgian government has made efforts to promote the tourism appeal of its five casinos and two dozen slots parlors, at present, authorities neither regulate nor restrict online gambling.

Olympic Entertainment Group (OEG) saw gaming revenues rise at its operations in all three Baltic states in 2011. OEG’s Estonian operations brought in €27.9m, a 12% rise from 2010’s total of €24.9m. Latvian operations were up 21.7% to €27.5m and Lithuanian revenues rose 11.2% to €17.9m. OEG also operates casinos in Belarus, Poland and Slovakia, but results on those operations won’t be issued until the end of February.