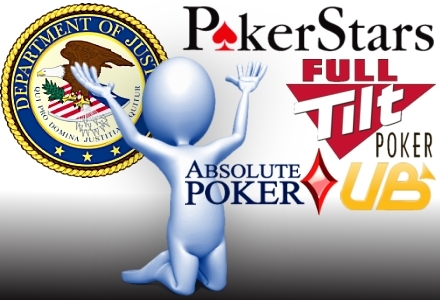 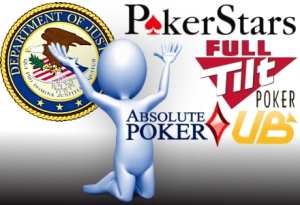 Here’s the latest tidbits regarding today’s announcement that the US Department of Justice (DoJ) has reached a $731m deal with PokerStars to acquire the assets of Full Tilt Poker (FTP) and reunite FTP players with their formerly dearly departed balances. For those interested in reading the settlement orders in full, PokerStars is here an FTP’s is available here:

✖ In case anyone missed it, the DoJ press release contained this tidbit regarding Absolute Poker/Ultimate Bet: “The U.S. Attorney’s office also filed a motion requesting that the Court enter a settlement agreement reached with Absolute Poker/Ultimate Bet that requires the company to forfeit all of its assets (the “Absolute Assets”) in order to fully resolve this action. The motion also requests that the Government be permitted to liquidate the Absolute Assets, with the net proceeds of that sale to be held pending the resolution of claims filed by other parties who have asserted an ownership interest in the Absolute Assets.” The main AP/UB assets cited in the settlement are the software and a player database of “six million” names.

✖ While civil forfeiture and money laundering claims against Stars and FTP have also been dismissed, the criminal charges are unaffected by Tuesday’s events. The in rem claims against the online poker domains will be terminated once the deal is completed in six business days. (PokerStars initial payment of $225m to the DoJ is reportedly due Aug. 6. A second payment of $125m is to be made within the next year, another $100m within two years, and a final payment of $97m within three years.) And while neither PokerStars nor FTP were required to admit any wrongdoing under the terms of the settlement, that didn’t stop US Attorney Preet Bharara from having his cake and eating it, too. “Today’s settlements demonstrate that if you engage in conduct that violates the laws of the United States, as we alleged in this case, then even if you are doing so from across the ocean, you will have to answer for that conduct and turn over your ill-gotten gains.”

✖ Under the terms of the deal, PokerStars boss Isai Scheinberg is required to step down from any managerial or directorial role at Stars within 45 days of the FTP acquisition taking effect. Scheinberg is also barred from taking any similar role at the new FTP, although this stipulation can be revisited once the criminal charges against Stars/Scheinberg have been resolved. It may have gone without saying, but the DoJ said it anyway: former FTP execs like Ray Bitar, Nelson Burtnick, Howard Lederer, Chris Ferguson and Rafe Furst are also blocked from ever holding any managerial or directorial role in the revived FTP. Those same FTP individuals are not entitled to receive any funds via the PokerStars account balance payouts.

✖ The poker companies surrendered the right to make any future claims based on the notion that the DoJ may not have had the legal right to seize their assets in the first place, so no coming back for redress after the US legalizes online poker. However, there is no specific prohibition by the DoJ against Stars or the relaunched FTP re-entering the US market at either the state or federal levels, pending passage of the relevant legislation. PokerStars chairman Mark Scheinberg underscored this point in a statement, saying: “The way we have operated our business since the U.S. Department of Justice brought its claim has underlined our credentials as a responsible online poker operator. In particular, the prompt repayment of our former US customers in as quick a time frame as possible demonstrated our industry-leading commitment to the segregation of customer funds. We continue to encourage jurisdictions all over the world to introduce sensible online poker regulation.”

✖ Following up on that last point, among the few people who apparently didn’t appreciate today’s news are Bwin.party investors, who may have put too much faith into statements by company execs that they would benefit from a regulated US online poker market while PokerStars was forced to sit on the sidelines. Bwin.party shares were down almost 7% (7.5p) on the day.

✖ Lee Jones popped up on 2+2 to clarify a few points. Chief among these, Jones said Stars was “not currently planning” to launch FTP in France, Italy, Spain, Denmark, Belgium or Estonia.

✖ FTP lawyer Jeff Ifrah told PokerNews that, contrary to online scuttlebutt, PokerStars didn’t throw its hat into the FTP acquisition ring until “after the [Groupe Bernard] Tapie deal was terminated” by the DoJ. In a separate interview with CrimeInTheSuites.com, Ifrah described the year-plus “case of a lifetime” as something he doubted the late legal thriller novelist John Grisham could have written, and a piece of legal history Ifrah found “very exciting and gratifying to be involved in.” Ifrah also said it was his “hope and belief” that the DoJ will reimburse US players “100% of their funds in the near future.”

✖ Meanwhile, FTP director Chris Ferguson‘s attorney says his client can’t comment on the deal “as he has not yet resolved his individual civil case with SDNY and the settlement discussions – while extremely positive and productive – must remain private and confidential at this time.”

✖ While the DoJ press release announcing the deal was dated July 30, the URL of the online release is dated July12, which most likely refers to the month/year, although a July 12, 2012 date might explain why the presser claims only former SunFirst Bank exec John Campos had been sentenced for his Black Friday role. Both Absolute Poker’s Brent Beckley and payment processing figure Ira Rubin received their sentences last week. If the latter explanation is true, it suggests that the deal (or just the press release) with Stars was completed over two weeks ago. Then again, the actual FTP forfeiture settlement is dated July 29, 2012 and Bitar signed on July 26, so who knows?

✖ Finally, in the department of ‘A Day Late, A Buck Short,’ Courthouse News Services has uncovered a new class action suit against FTP, brought by Illinois resident Judy Fahrner on behalf of FTP’s former Illinois player base.