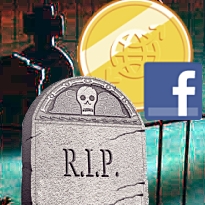 This week’s announcement by social network Facebook that it is phasing out its Facebook Credits virtual currency is getting lots of ‘likes’ from analysts. The long-term vision for Credits becoming a universal online currency didn’t really pan out, as it was primarily used by game developers who nonetheless implemented their own game-specific currencies, resulting in confusion among gamers as to what was worth what. Facebook has decided to allow app and game developers to accept local currencies, and existing Facebook Credit balances will be converted to their equivalent value in euros, pounds, shekels or beaver pelts. Facebook will continue to take its hefty chunk of all transactions on its network, and the simplified math is expected to encourage more punters to put money into the system and more companies to sell their wares online. But before you get too excited, no, you still can’t convert your Zynga Poker bankroll into real cash.

Fresh off receiving its Nevada online poker license, International Game Technology (IGT) has launched its popular Da Vinci Diamonds slots title on Facebook. The game is available via IGT subsidiary DoubleDown Casino, and marks the first time IGT has extended the reach of one of its brick-and-mortar slots offerings to the social gaming world.

For sports fans, New York-based Five1Eight Internet Media has launched BetBomb.com, a social sports betting site in which players predict the outcomes of sporting events tournament style for merchandise prizes. Players can also issue head-to-head challenges to other players. The company is keen to stress its not a gambling site, limiting accessibility to over-18s and blocking residents of 23 US states that aren’t down with the program.

RuneScape, the world’s most popular fantasy massively multiplayer online role-playing game (MMORPG), is coming under fire for its addition earlier this year of ‘Squeal of Fortune’, a daily prize wheel for which players can use real-world currency to purchase extra spins. Squeal’s debut was accompanied by a change in the game’s terms and conditions that made players liable for “any unauthorized use of your subscription by third parties” up to $200/day. Critics are suggesting the change was made with the expectation that young players – whose parents used their credit card to pay for their kid’s subscription – will not understand the full ramifications of their wheel-spinning ways, especially since the game provided no option to disable spin purchases. For adult subscribers, there’s also the possibility that a minor could access the game and just keep buying spins, much like the five-year-old who allegedly ran up a $50k tab on spread betting outfit Spreadex. Then again, a judge ruled that Spreadex couldn’t collect on that debt, so Jagex may find it difficult enforcing that edict in court.