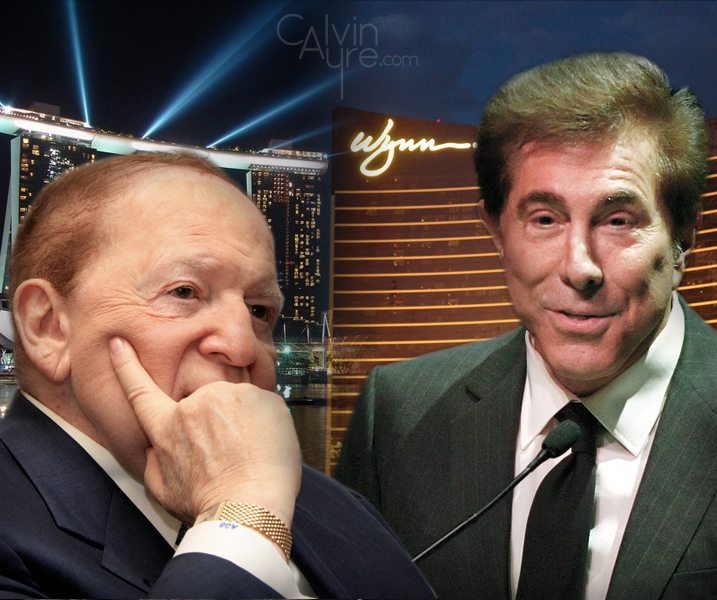 Back in March I wrote a column here on CalvinAyre.com about potential “pairs trades” in the gambling sector. “Pairing Wynn Resorts (WYNN) with a short position in Las Vegas Sands (LVS)… is an interesting contrarian play,” I wrote at the time. LVS was on a bull run, up over 30% in two months, and was named by CNBC personality Jim Cramer as his “favorite casino stock.” Wynn, meanwhile, was struggling along, beset by the legal battle between founder Steve Wynn and shareholder Kazuo Okada, and an erroneous SEC filing reporting an additional lease in Macau. As I argued, the market had priced in Las Vegas Sands’ successes, and Wynn’s struggles. Given time, the two stocks would start to converge.

By the end of April, the gap between the two stocks had indeed narrowed. LVS would gain another ten percent to a three-year high before beginning to stall out. In late April, LVS slumped after its earnings release despite becoming the first casino operator to generate $1 billion in pre-tax earnings in a single quarter. “LVS became a momentum stock,”  I noted at the time. “And the Street loves to take down momentum stocks.” Meanwhile, WYNN, despite seeing earnings fall 19% year-over-year, continued to rise into the end of April.

And then the bottom fell out. World equity markets, which saw a strong first quarter, began to show weakness at the beginning of May, as worries about the faltering Greek banking system and its potential effect on Europe took their toll. And when the world economy sneezes, gambling stocks get pneumonia. LVS closed Friday at $46.38, down over 15% since the start of the month and off 25% from a pre-earnings high over $62 per share in early April. WYNN, meanwhile, is down 23% since the start of the month (even when including a 50 cent per share dividend paid last week). Amazingly, before Friday’s 0.4% gain to $101.94, the stock had fallen for thirteen consecutive trading sessions dating back to May 1st.

The effect on the recent drop on both stocks has been substantial. WYNN is trading near a 17-month low; LVS, meanwhile, has given up nearly all of its early-year gains, and returned to the range of about $36 to $48 in which it traded for nearly all of 2011. Their Macau subsidiaries, Wynn Macau (1128.HK/WYNMF.PK) and Sands China (1928.HK/SCHYY.PK) – which provide substantial portions of the parent companies’ value – have struggled as well, with disappointing April revenue figures at the Chinese gambling mecca another near-term headwind. LVS in particularly was likely hurt by the numbers, with its opening of Sands Cotai Central expected to provide a stronger boost to the island’s gaming revenue. Deutsche Bank analyst Carlo Santarelli told the Las Vegas Review Journal that “contributions from Sands Cotai Central don’t appear to be having a meaningful impact on gross gaming revenue to date.” With a new Wynn location now approved, and future construction from SJM, Galaxy, and Melco Crown expected, there are clearly worries that the Macau market may face saturation sooner than expected. Add in the fears of a so-called “hard landing” for China’s recently explosive growth, and the effect of a Eurozone collapse on the worldwide economy, and the optimism surrounding Macau appears to be diminishing. And even with the recent drop in stock price, neither WYNN nor LVS look particularly cheap at first glance, with the stocks trading at 20 and 24 times trailing earnings, respectively.

But as I argued during the good times in the first quarter, investors must look forward, and the recent weakness in two of the world’s leading casino operators should create a buying opportunity. Yes, Macau revenue figures came in below analyst estimates; but it still rose 22 percent to over US$3 billion for the month, nearly three times the April gaming win in Atlantic City and the state of Nevada combined. Yes, the Chinese economy may face some short-term troubles; yes, competition on the island will be fierce. But, honestly, who gives a shit? At 24 times earnings for LVS (23 for Sands China), does 4% growth in China for 2012, instead of 8%, really change the bull case? Is a Eurozone collapse going to change the cultural appeal of gambling, or the enormous economic benefit from the monopoly granted to Macau by the mainland?

There is so much more money to be made in Macau that even discussing a 22% actual, versus 24% expected, growth rate is just asinine. (Bear in mind, too, that given the high-rolling nature of gambling on the island, that “slower” growth could easily be a result of lower-than-expected hold.) As Melco Crown’s James Packer argued last week, the Chinese middle class is “going to change the world” – and change the island. The island’s model has so far been solely based on the VIP segment, but mass market growth now eclipses the rate of the higher-revenue, but lower-margin high rollers. Non-gaming revenue – still less than 1% of the total revenue for the island’s gambling operators – has the opportunity to grow exponentially. The pending construction of theme parks nearby is just a tiny step toward the expansion of Macau from a purely gambling-focused island to a more multi-dimensional resort destination. Operators like Wynn and Las Vegas Sands – who have successfully diversified their resort operations in Vegas, growing hotel, dining, and entertainment revenues at a strong clip – will be able to do the same on Macau, improving the bottom line as continued grogambling revenue growth adds to the top line. The mass market gambler and the non-gambling tourist have so far been literally ignored on Macau. That will change – to the operators’ benefit.

The overall story of Macau is not changed by economic worries or a 2 percentage point miss on a monthly revenue figure. What has changed is the relative strength of Las Vegas Sands versus Wynn, particularly over the last few months. While Sands CEO Sheldon Adelson has boasted of plans for a multi-billion dollar “Euro-Vegas” in Spain and seen 66% growth at the Marina Bay Sands in Singapore, Wynn has meekly bowed out of the running for a new casino in Massachusetts, and looks set to enter a bidding war in Australia. While Adelson has ponied up millions in political contributions to affect the national security debate, Wynn has engaged in pissing matches with former partner Okada and “Girls Gone Wild” producer Joe Francis. And while LVS posted a literally record-breaking first quarter, Wynn followed up a record-breaking 2011 of its own (the company set a record for gambling win on the Las Vegas Strip) with an 8% drop in revenue in Las Vegas and continuing worries about its market share in Macau.

When looking at Macau, analysts love to make projections and create models to estimate the present value of the companies operating in the market. This is why the April gross revenue “miss” matters to the Street: the new, lower, growth number goes into the spreadsheet, which means that Sands China’s projected 2017 market share of 16% now results in 2017 earnings of $3.46 per share instead of $3.69 per share, or whatever the number is that the computer spits out. So Sands China is now worth $27.23 instead of $31.25, and majority owner LVS is worth $53.23 instead of $57.60. This is absurd on its face; making accurate projections about a market like Macau, which is subject to so many varied and substantial economic, demographic, cultural, and political (the Chinese are still Communist, even if they don’t always act like it) effects, is simply impossible. The Street continues to attempt this projections, because if they’re wrong, they can just blame the model. But as the old saying goes, “Garbage in, garbage out.”

Granted, investors can use these projections as a benchmark, but common sense goes a long way in investing, and leaves one simple question. Which business do you want to own: one whose CEO is clearly intent on leaving a legacy as the most innovative, most aggressive, and most influential gambling executive ever, or one whose CEO seems a step behind, who is focusing on personal grudges and million-dollar vases?

Earlier in the year, I dismissed the Okada affair as a minor headache, and also noted that the forced redemption at below-market rates was worth somewhere in the range of $8 per share to existing shareholders, based on Wynn’s share price at the time. But the saga continues, with Okada’s recent document request threatening to shine potentially unflattering light on Wynn’s previous dealings in Macau. Meanwhile, Wynn was outmaneuvered politically in Massachusetts, and its potential bid for Australia’s Echo Entertainment is simply an attempt to get what Las Vegas Sands already has: multiple markets that can cater to Asia’s VIP clientele.

But what most concerns me about Wynn’s direction is the company’s widely reported – though unconfirmed – flirtation with Zynga (ZNGA). I  argued last month that Zynga has little chance to becoming the online gambling powerhouse some have forecast; but, that aside, the fact that CEO Steve Wynn is even considering the Facebook game developer as a partner raises serious questions. The most obvious is: what the hell is he thinking? Wynn properties are renowned for their opulence and attention to detail, and Steve Wynn has made his fortune through creating and marketing a brand that is associated with class, taste, and elegance. Wynn’s cachet is so great that his designer was granted a lengthy profile in the New Yorker earlier this year. That he would contemplate for a second associating his unique brand with the image of shut-ins playing Farmville on their phone is bizarre, at best. Granted, Wynn is late to the online poker party, with many potential partners already tied up with competitors. But the Wynn brand has created a $10 billion company; it is not to be tarnished in a high-risk attempt to enter a market that, for all the hype, still shows little hope of even noticeable returns in the next few years.

When looking at LVS and WYNN, the numbers are roughly similar. LVS trades, as noted, at a higher trailing earnings multiple; but that multiple is justified by its presence in Singapore and market share edge in Macau. And when you look at the direction on the businesses right now, Las Vegas Sands – and Adelson – have the clear advantage. Adelson’s grand plans will require substantial capital – and substantial risk. Planning an eleven-figure investment into Spain, of all places – with unemployment over 20% amid a potentially continent-wide currency crisis – is hardly a safe bet. It is a high-risk – but potentially high-reward – move. But Adelson’s goal for his company is clear: to be the dominant gambling powerhouse in the world, if not on the Internet. At the current, lower, share price, betting on LVS doing just that appears to be a risk worth taking. Right now, Steve Wynn’s goals are unclear, and his company’s stock less attractive. Yes, it’s substantially cheaper than it was just months ago; but what, exactly, are investors buying into?

On Las Vegas Sands’ most recent earnings conference call, Adelson noted that, based on its growth, size, earnings power, and dividend, LVS had only one peer among the 12,000 stocks traded on US exchanges: Apple (AAPL), the world’s most valuable company. That is the kind of company with which Sheldon Adelson wants to be associated. Wynn’s flirtation with Zynga and the general lack of direction his company has shown of late should make investors wonder exactly what kind of company Steve Wynn wants to keep – and what kind of company Wynn Resorts wants to be.