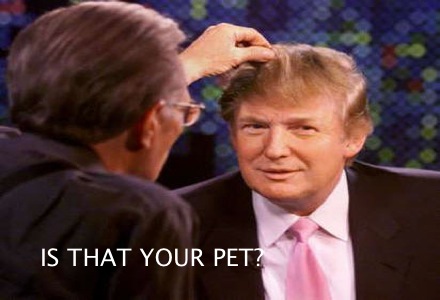 Donald Trump is one of those linked to the gaming industry that we here at CalvinAyre.com already like to have a lot of fun with. Even if that word doesn’t enter the Trumptionary, the amount of fun to be had at his expense is relentless. Whether it be throwing his hat in the presidential ring, getting his rocks off with a porn star and in between entering the world of the hardcore gay pornography site. His latest project is even closer to home for the tablog than the notion of a girl with hardly any clothes on (hard to believe right!)

The Don is getting into a strictly business partnership with New York hedge-fun manager Marc Lasry to take advantage of the date that online poker legislation hatches in the USA. They don’t care whether it’s intra-state or federal, they’re having a piece of that pie (we’ve got our dollars on it being intra-state). Anything that casts our eyes away from the balding ginger skunk on Trump’s head is just okay in our books. The venture is between Avenue Capital Group and Trump Entertainment that is owned already by Avenue. Trump Entertainment would own 10% and supply the licenses with the remaining split between Avenue and Donald himself. It’s quite the tag team if you ask us. That’s tag team as in there’s two people working together to get something done. Shit we’re digging a hole here aren’t we!

THE TRUMPSTER GETS YOUR ATTENTION

As with most things, the Trumpster attaches his name to this is getting a lot of media attention – something that can only be good for the gaming industry at large. Anyone that gives the online gaming industry so much media attention and therefore legitimizes it in the eyes of US media is good in our books. With the Full Tilt Poker “ponzi” scandal still smoking at the embers, the help that Trump’s media exposure give the industry is something of more value than a hair transplant or razor would be to him. During his failed run for the White House, Der Donald garnered 893,424 online mentions through April. Obviously some of the publicity will be bad and HIS brand will be damaged. The fact remains that the gaming industry will gain legitimacy from the exposure that he gives us.

That’s not to say there are question marks surrounding Trump’s involvement with the industry. You don’t have to be eagle-eyed to work out this technical Luddite has made a real pigs-ear of much of his time spent in the land-based gaming industry. He was one of Atlantic City’s pioneers and look where that’s heading. Trump thinking that he can run an online gambling company is like giving the keys of the Starship Enterprise to a 17-year-old boy-racer that just passed his driving test. Trump’s generation is land-based casinos and the job he made of that we don’t think he should be trusted at the helm of an online gaming company – with or without his pal’s money.

Conversely if he does end up seizing control of something that means his knocking around in the online gaming industry we will be yodeling from the top of the Matterhorn. Granted we already have Pwin to give us all the content that we need. If Mr Combover makes his way into the arena just think how much fun we could have here on the tablog. We’d expect to have a story at least once a day on the Don as he makes his haphazard journey around our industry. If he thought he could get away with shagging a porn star on the outside just wait until he gets into iGaming! Donald, if you’re listening we’ll embrace any of the misdemeanors that you find yourself in. If you can’t laugh at yourself though you haven’t got a chance mate!