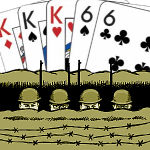 Given the distraction of the holiday season, you may have missed our report that indicated the US federal war against online poker eCom is far from over. Now a report from Forbes.com sheds light on the specific battleground that is Washington State, the only American jurisdiction that considers online poker to be a Class C felony.

In the Arrow Checks situation, government investigators tracked wire transfers totaling more than $20m from Canada and Texas to Bank of America accounts held by Scott Seguin and Justin Sather. The feds claim the funds were linked with PokerStars, and on that justification, some $5.1m was seized in December.

In November, the feds seized $1.3m from accounts at SunTrust and Wells Fargo controlled by Sanjay Panya, which the feds say represented proceeds from Full Tilt and Absolute Poker. Also in November, over $550k was seized from Secure Money accounts linked to Ultimate Bet. Add to these the earlier seizures involving Allied Wallet, Account Services and the $50m given up by Daniel Tzvetkoff and you have a full court press against the financial underpinnings of online poker.

That said, it’s important to note that the seized funds didn’t actually belong to the poker companies, but represented payouts in transit to American poker players. So this is primarily a war against US citizens, with the payment processing firms considered only ‘collateral damage’. It’s a sad fact, but daft laws, and the enforcement of same, are nothing new. It took America 14 years to realize they’d goofed by passing their anti-alcohol prohibition laws. And long after the fact, it’s rational, reasonable voices like the one below that we recognize as the ones who were right all along.