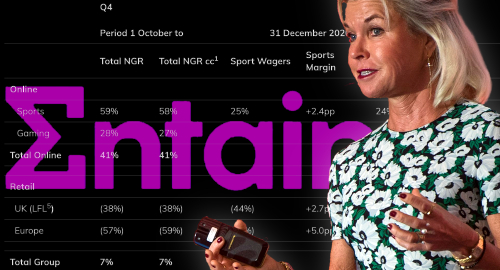 UK-listed gambling operator Entain plc has appointed a new CEO while celebrating a 41% rise in its online revenue in the final quarter of 2020.

On Thursday, Entain announced that it had appointed Jette Nygaard-Andersen as its new CEO, replacing the outgoing Shay Segev, who announced his intention to step down earlier this month. Segev’s exit is effective immediately, although he’ll “remain available” until July 8 to answer any questions his successor might have.

Nygaard-Andersen (pictured) has been an independent director at Entain since 2019, back when the company was still known as GVC Holdings. She previously served in an executive capacity at a number of major European non-gambling firms, including media conglomerate Modern Times Group and Danish shipping firm AP Moeller-Maersk.

Entain quoted Nygaard-Andersen saying she “cannot wait to get started” leading the company, with a focus on continuing Entain’s “extraordinary momentum” in existing markets, its expansion into new regulated markets while remaining “deeply wedded” to the company’s player-protection efforts.

Nygaard-Andersen will have help from Entain’s CFO Rob Wood, who was named deputy CEO on Thursday. Wood will be responsible for Entain’s retail operations in the UK, Belgium, Ireland and Italy, as well as M&A activities.

That latter category will include dealing with the fallout of US casino operator MGM Resorts’ recently scrapped plans to acquire Entain. Few observers believe that MGM won’t eventually take another shot at acquiring Entain, with which MGM is partnered on the US-facing ROAR Digital (BetMGM) online gambling and sports betting joint venture.

Wood will also shepherd Entain’s ongoing efforts to acquire Latvia’s Enlabs, the parent of Optibet and Ninja Casino. While there’s been resistance from some Enlabs shareholders, Entain continues to express confidence that the deal will get done.

ENTAIN CLOSED OUT 2020 ON A ROLL
Nygaard-Andersen is joining a firm that finished 2020 on a high note, according to a trading update Entain released Thursday. Entain said group revenue was up 7% in the final three months of 2020, as a strong showing by its online operations – everywhere except Germany, that is – offset serious declines at the retail level.

Retail operations enjoyed even larger sports margins gains in Q4, but it wasn’t enough to offset the second round of pandemic lockdowns. UK retail operations fell 38% on a like-for-like basis – ignoring the roughly 300 shops closed since Q4 2019 – while European retail tumbled 57%.

For 2020 as a whole, Entain said only that revenue was ‘in line’ with expectations, while rising 1% on a constant currency basis. Online revenue improved 27% while retail was down around 37%. Entain says it’s sticking with its earlier forecast of FY20 earnings of between £825m-£845m.

The BetMGM joint venture finished 2020 with operations in 10 US states, which pushed revenue up 130% from 2019 to a range of US$175m-$180m. The brand made its Iowa debut earlier this month and will launch in Michigan on Friday (22). Entain claims BetMGM boasted an 18% market share in the states in which it was active as of November.

As for 2021, Entain expects its boffo online performance to decline somewhat as the ongoing rollout of COVID-19 vaccines leads to a gradual resumption of normal retail gaming operations. However, Entain’s convinced that there’s been a permanent shift in gamblers’ attitudes toward online play that will “more than cover any permanent channel loss from our retail estates.”

Entain’s updates failed to make much of an impression on shareholders, as the company’s share price closed up less than 1% by Thursday’s close.