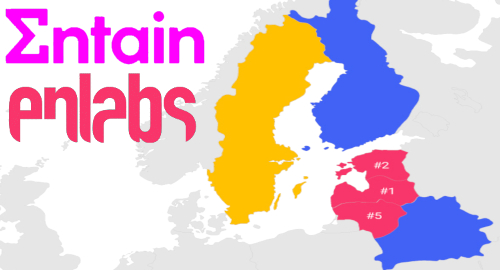 UK-listed gambling giant Entain has made a £252m offer for Baltic online operator Enlabs in a bid to expand Entain’s Eastern European presence.

On Thursday, Entain (until recently known as GVC Holdings) announced that it had reached agreement with an independent bid committee of Enlabs on an SEK2.8b cash offer to acquire the Latvia-based company, whose online gambling brands include Optibet, a fixture in Baltic markets. Enlabs also recently absorbed Ninja Casino parent Global Gaming.

Entain’s bid has the acceptance of shareholders who collectively possess around 42.2% of Enlabs and the bid committee has recommended that the rest of Enlabs shareholders get on board. Entain needs to secure approval of shareholders controlling 90% of Enlabs within a four-week window expiring February 18.

Entain says the proposed acquisition would not only boost its Baltic presence – Enlabs is the top operator in Latvia, the second-biggest in Estonia and a top-five player in Lithuania – but also offers potential to expand into Belarus and Ukraine, as those two markets proceed toward regulated online gambling launches. Entain plans to retain Enlabs chair Niklas Braathen to ensure the success of these expansion aims.

(One market in which Enlabs isn’t a player is Sweden, as the company formally revoked its Swedish online gambling licenses a couple days before Christmas. Enlabs had been slow-rolling its Swedish market launch, citing the need for ‘development work’ on its platform, but Enlabs vowed to launch “several brands” in Sweden by this summer.)

Entain said it wasn’t planning any “material changes to Enlabs’ organization, management and [roughly 330] employees, including their terms of employment, or to the locations of Enlabs’ operations.” In addition to its Riga HQ, Enlabs currently has offices in Tallinn, Vilnius, Minsk, Malta, Marbella and Stockholm.

Braathen said Enlabs “instantly saw the strategic logic” behind Entain’s offer, and the latter firm would provide “an excellent home” for Enlabs’ operations and staff.

Enlabs shareholders welcomed the news, pushing the stock up nearly 4% by Thursday’s close, while Entain shareholders were less impressed, leaving the share price essentially where it began the day.

Enlabs won’t issue its Q4 20 financial report until late-February but did issue a preview Thursday that claimed revenue in the three months ending December 31 totaled around €20.4m, with adjusted earnings of around €6.4m.

Entain’s investor presentation stated that Enlabs was projected to generate revenue of €89.5m and earnings of €23.5m in 2021. That would put Enlabs’ compound annual revenue growth at a rate of 40% over the past five years.

The move by Entain – already the parent of Bwin, Coral, Ladbrokes, PartyPoker and more – to grow even more enormo may help explain why the company opted to reject the takeover bid by its US online gambling joint venture partner MGM Resorts earlier this week. Your move, MGM…