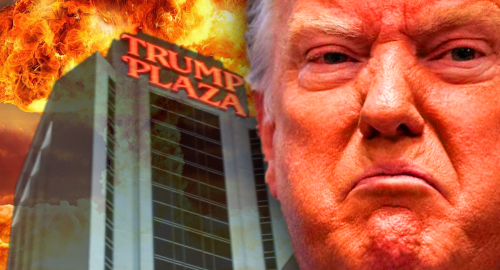 Donald Trump’s Atlantic City casino failures will soon be but a memory as the crumbling Trump Plaza is slated to be blown up real good just days after Orange Julius is forced to exit the White House.

On Wednesday, the Associated Press reported that Atlantic City’s municipal government will hold an auction for the right to press the button that lights the fuse that sets off the dynamite that brings down the crumbling remnants of the casino that Don built.

The bidding will get underway this Thursday and will run through January 19, after which the top bidders will participate in a live auction for the right to turn the Plaza to dust. Funds raised will go to the Boys & Girls Club of Atlantic City, and AC Mayor Marty Small hopes the auction will net over $1m.

The Plaza closed in 2014, a year that saw four AC gaming venues shut their doors after a slower than expected market recovery following the 2008-09 global economic meltdown. It wasn’t until 2016 that the AC market was able to post annual gaming revenue growth.

The property was then and is still owned by Trump’s buddy Carl Icahn, who acquired Trump Entertainment Resorts (TER) from a certain spray-tanned demagogue. In March, AC sued Icahn Enterprises to accelerate the Plaza’s demolition timetable.

Trump was effectively ridden out of AC on a rail after running not one but three casinos into the ground. The Trump Taj Mahal eventually became the Hard Rock Atlantic City, while the Trump Marina is now the Golden Nugget.

Although Trump retained a 10% ownership stake in TER, he sued to have his name removed from the properties after the mothballed Plaza became (even more of) an AC eyesore. Despite a shameful record of shafting local mom-and-pop contractors, Trump subsequently bragged that “the money I took out of [AC] was incredible.”

ONE CASINO CRUMBLES, ANOTHER RISES (MAYBE)
The Showboat Casino was another AC property that closed in 2014, and the shuttered complex changed hands a couple times without ever finding a purpose. Bart Blatstein, who acquired the property a few years ago, expressed renewed hope this January that the Showboat might have a future.

On Tuesday, Atlantic City’s Casino Reinvestment Development Authority gave land use approval to Blatstein’s plan to develop a $100m water park on a vacant lot adjacent to the Showboat. Blatstein, who still hopes to reopen the Showboat’s gaming floor at some point, said the park would help draw a wider variety of tourists to AC.

However, Blatstein is hedging his water sports wager by seeking an annual sales tax rebate of up to $2.5m for a 20-year period, as well as certain tax breaks on construction materials. The Development Authority is still mulling this request, but is expected to give its answer before the year is through.