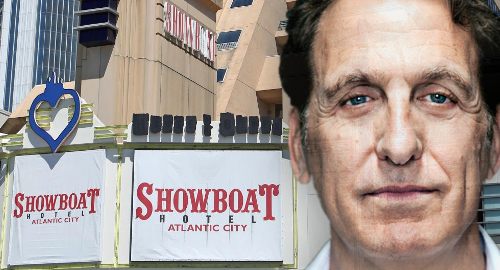 Atlantic City’s long-shuttered Showboat Casino may yet reopen as a gaming venue if owner Bart Blatstein gets his way – and all other AC casino operators don’t.

On Tuesday, Blatstein (pictured) told the Associated Press that he’d sold an Atlantic City shopping and entertainment pier to Caesars Entertainment, the same property that Caesars sold Blatstein in 2015. Terms of this most recent sale weren’t disclosed by either party.

Blatstein celebrated the sale, saying it allowed him to be “completely focused on the Showboat,” which Caesars had sold to Stockton University in late-2014. Stockton then sold the property to Blatstein a couple years later after a deed restriction prevented Stockton from using the Showboat as a campus residence.

That deed restriction required the Showboat to be used purely as a casino, a requirement that Stockton was unable to convince Carl Icahn, a party to the deed restriction, to waive. Blatstein faced an entirely different problem, as a separate deed restriction imposed by Caesars in 2014 prohibited the property from opening a casino for 10 years.

Blatstein apparently believes he can convince Caesars to lift its ‘no casino’ restriction, possibly because Caesars’ ongoing merger with rival Eldorado Resorts may force the company to downsize its Atlantic City holdings. Regardless, Blatstein told the AP that he would soon be making an announcement of a “very significant development” involving the Showboat.

Atlantic City’s casinos are coming off a year in which their combined gaming revenue topped the $3b mark for the first time since 2012. But most of AC’s individual casinos posted year-on-year declines and operators such as the Golden Nugget’s Tilman Fertitta have declared that AC can’t afford to feed the casino mouths it has now, let alone welcome any newcomers.