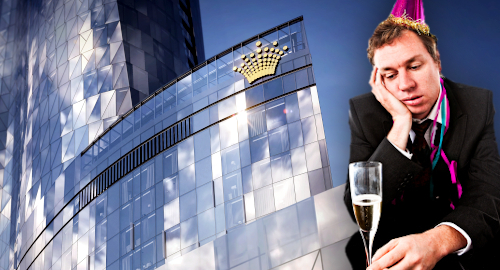 Australian casino operator Crown Resorts will open its new Crown Sydney venue with booze but without gambling, while its Melbourne venue is facing an earlier than expected license review.

On Wednesday, Crown announced that it had received an interim liquor license for its new Sydney venue ahead of the property’s plan to open on Monday, December 28. The license allows Crown Sydney to serve hooch at the Crown Towers hotel, as well as the property’s bars and some restaurants, but only until April 30, 2021.

There will be no alcohol served on Crown Sydney’s gaming floor, because the Independent Liquor and Gaming Authority (ILGA) New South Wales has forbid the property from offering gambling. The ILGA is waiting on the February 2021 release of an inquiry’s report into Crown’s shocking record of regulatory non-compliance at its other Aussie properties before making a call on allowing Crown Sydney to conduct gaming.

If you’ve been under a rock for the past few months, Crown’s board, senior management and its largest shareholder James Packer essentially crapped the bed by publicly expressing ignorance and/or disinterest regarding Crown’s willingness to look the other way when regulations interfered with revenue generation. Seriously, it wasn’t pretty.

Last month, Crown begged to be allowed to conduct a ‘working test’ of gambling at Crown Sydney but the ILGA wasn’t convinced that anyone at Crown had learned any lesson from their downfall, except perhaps that shareholders really don’t like bad press, particularly the kind that dominates national media for weeks at a stretch.

MELBOURNE CASINO LICENSE REVIEW BROUGHT FORWARD
Meanwhile, Crown got some more bad news this week as the state of Victoria announced that it was accelerating its review of Crown Melbourne’s casino license. The five-year review was last conducted in 2018, but Victorian Gaming Minister Melissa Horne said the “concerning evidence” of Crown’s non-compliance meant the 2023 review was being brought forward.

The Victorian Commission for Gambling and Liquor Regulation (VCGLR) previously issued Crown a ‘show cause’ order to offer some defence against the regulator taking “disciplinary action” for Crown Melbourne’s lack of compliance with rules regarding junket operators.

But Victoria’s government has now appointed a special commissioner to conduct the review of Crown’s license, apparently bowing to public sentiment that the VCGLR has proved too willing to forgive Crown’s transgressions. The commissioner has been asked to deliver its review recommendations sometime next year.

SELLOUTS
Along with the impact of pandemic closures, the regulatory uncertainty surrounding Crown has done a number on its share price this year. Crown announced this week that Aussie investment group Perpetual Ltd had reduced its Crown holdings from 63.2m shares to 55.4m.

The news will undoubtedly boost rumors that Crown is a likely takeover target, with names such as Blackstone Group reportedly kicking the casino operator’s tires. However, with fresh regulatory concerns continuing to crop up, would-be acquirers may want to wait to see how flat these tires get before pricing their offer.