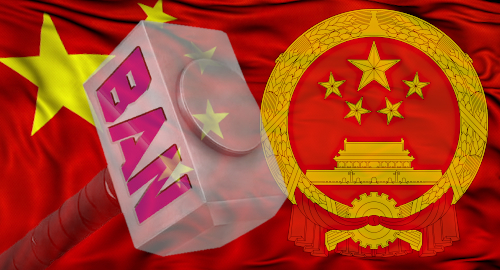 China’s online gambling antagonism has contributed to the country’s cyber-watchdog dropping the ban-hammer on over 100 mobile apps for creating ‘content chaos.’

On Tuesday, the State Cyberspace Administration of China (CAC) announced that it had ordered the removal of 105 mobile applications that certain busybodies complained were “spreading obscene, pornographic, violent, bloody and other illegal information, and providing illegal services such as fraud, gambling, and prostitution.”

The purge was reportedly part of a “special rectification of mobile application information content chaos” that the cyber-prudes initiated on November 5. This anti-chaos drive is reportedly only just the beginning of the CAC’s drive to ensure a “clear cyberspace.”

Among the most recognizable apps to be hitting the bricks belonged to travel site TripAdvisor, although the precise reason behind its inclusion remains unclear. The company has yet to comment publicly on the report, but it’s possible that the app committed the cardinal sin of referring to Hong Kong or Taiwan as a separate country.

However, August saw China announce the existence of an unpublished blacklist of foreign countries in which casinos are permitted and which allegedly attempt to lure mainland Chinese abroad to gamble. So perhaps TripAdvisor included some reference to an Australian or Philippine casino in some of its listings.

The CAC also suspended downloads from eight small-scale app stores for allegedly failing to properly screen apps for forbidden content before listing them on their sites for mainlanders to download.

China routinely ranks high among nations who order major app store operators such as Apple and Google to purge apps deemed to be either illegal or simply undesirable. Apple has stated that the bulk of China’s requests target apps offering “illegal gambling or pornography.”

CHINA’S TECH GIANTS FEEL THE HEAT
Last month, the CAC took part in an online seminar on ‘Collaborative Governance of Cyber Black Industry,’ which stressed that major internet companies need to not only strengthen their network security but also “uphold an open and cooperative attitude” with government agencies.

China’s high-tech sector was recently shaken by the arrest of a high-ranking Baidu exec for facilitating online gambling promotion via the site’s search engine. Subsequent reports indicated that online gambling operators’ use of Baidu was an ‘open secret’ within the tech community.

The arrest led China’s Caixin media outlet to produce a series of exposés on the symbiotic ties that bind online gambling operators to China’s tech giants, including social media platforms and search engines like Baidu.

Shortly thereafter, netizens noted that references to these articles were being scrubbed from Baidu’s search engine. Baidu rushed out a fairly laughable statement claiming it must be a software glitch and that “no one or any department at Baidu has made any move to block” the Caixin reports.

Last month’s CAC seminar also heard that online gambling promotion is increasingly ephemeral and non-verbal, with links to online gambling sites embedded in QR codes, digital images and other forms that leave little tangible trail behind, making it even harder for the authorities to trace these breadcrumbs back to grandma’s house.