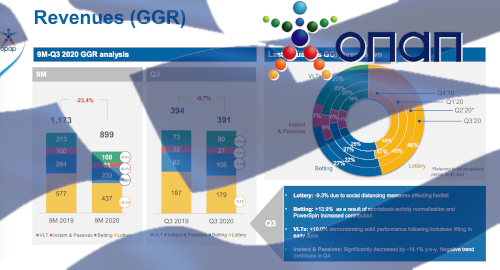 Greek lottery and betting operator OPAP swung back into profitable territory in the third quarter although its retail operations have once again been shut due to pandemic precautions.

Figures released Wednesday show OPAP generated revenue of €391m in the three months ending September 30, a 0.7% fall from the same period last year but more than triple the Q2 2020 sum. Pre-pandemic cost controls allowed earnings to inch up 1.5% to €105m while net profits rose 8.3% to €52.8m.

OPAP’s Q3 benefited from the reopening of its retail operations in June after COVID-19 forced the closure of its lottery, betting and video lottery terminal (VLT) networks in March. Numeric lotteries remained broadly negative in Q3 thanks to retail capacity restrictions, with revenue down 9.3% to €179m, while the Instant & Passives segment fell 14.1% to €27.1m.

VLT revenue rose 10% year-on-year to €80.1m, the segment’s best quarterly performance this year. Average active monthly players have yet to retain the 131k level set in Q1 but posted a modest rise from Q2.

OPAP’s retail operations in North Greece were ordered to shut again on October 16, while the rest of the country followed suit on November 7 with a tentative reopening date of November 30. In Cyprus, OPAP shops in Limassol and Pafos – representing 40% of OPAP’s Cypriot business – were shut November 12 with the same November 30 relaunch target.

OPAP’s in-house online gambling segment remains a revenue minnow at €10.6m but this was triple its Q3 2019 contribution. The sum was only €600k higher than Q2, which OPAP blamed on a dearth of jackpots in its Tzoker lottery product.

Online activity took a dip after retail’s restart but is enjoying another surge as COVID-19’s second wave appeared. The launch of an online casino product reportedly didn’t hurt.

Kaizen reported a new monthly active customer peak of 217k in Q3, from which it derived revenue of €89m (73% via Greece/Cyprus). This business contributed €7.1m to OPAP’s Q3 profit.

OPAP’s acting CEO Jan Karas said the past nine months demonstrated his company’s ability to roll with the pandemic and he’s confident his team will rise to meet the current challenge. OPAP believes it’s better positioned to weather this second lockdown due to the (knock wood) lack of disruption to major sports this time around, as well as its increased Kaizen stake.